Bangladesh will start their World Cup campaign against South Africa on June 2.

Bangladesh have always been the underdogs at the World Cup. They first featured in the tournament back in 1999 as an associate nation. After attaining the Test status in the following year, they have been a regular feature in the quadrennial event. Bangladesh’s best performance in the tournament came four years ago when they reached the quarterfinals in 2015.

The team from the subcontinent will be looking forward to putting up a better performance this year. They are usually very unpredictable and can give the big teams a good run for their money. Moreover, the Bangla Tigers have stuck to their captain Mashrafe Mortaza who also led the team in the previous edition.

Bangladesh’s two warm-up games before the tournament will be against England and Afghanistan. They will kick off with the actual campaign on June 02 against South Africa at the Kennington Oval in London. At the same venue, they will face New Zealand after a two-day break. Their last two encounters in the league stage will be against India and Pakistan, two teams who are expected to put up some tough competition in the tournament.

The underdogs have picked up a very balanced team this time. They have got a lot of experience in their ranks with the likes of Tamim Iqbal, Shakib Al Hasan amongst others. However, their performances in recent times haven’t been as impressive and the team will need to work upon their plans well before they head into the tournament. 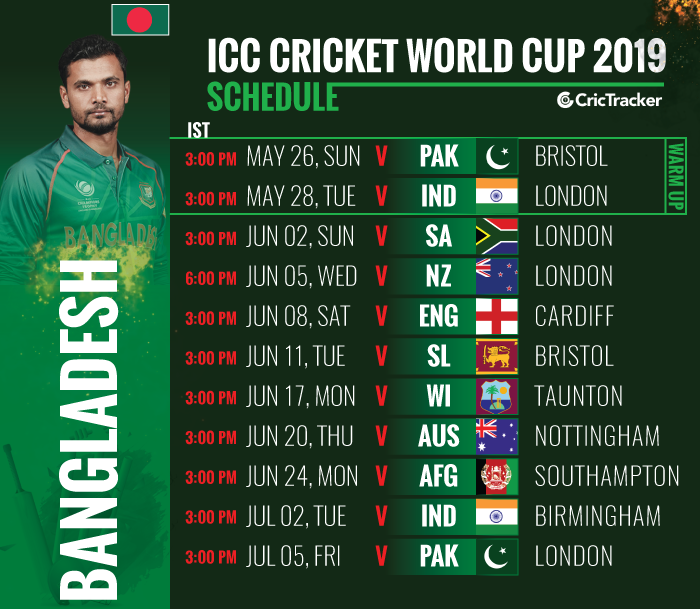