Morgan's men need to win their next game to ensure qualification

Prior to their game against India, England was in a bit of trouble. However, Eoin Morgan and Co thumped India at the Edgbaston in Birmingham and got themselves to 10 points from eight matches. Their next match is versus New Zealand on July 3 at the Riverside Ground in Chester-le-Street. Their NRR, which currently stands at +1.000, also is a huge positive for them in order to qualify for the semis.

However, Morgan’s men can’t afford to be complacent in their last game by any means. A defeat would leave them depending on the result of the match between Pakistan and Bangladesh. Pakistan with nine points can overhaul the Brits and knock them out of the tournament. The Kiwis, on the other hand, are almost through to the next round, barring something extraordinary in the net few encounters.

There’s a slight chance of rain, but it’s pretty much negligible. A significant amount of cloud will be there, but the skies will clear up as the game progresses The atmosphere for cricket will be pleasant with the temperature in between 14 degrees Celsius and 19 degrees Celsius. The humidity will be in the 60s at the start, but will come down to 45 by the close of play.

The pitch at the venue has been a belter for batting in the two games played so far. Bowlers are not expected to dictate terms. However, the strip has something for the pacers if they are ready to bend their backs. Spinners won’t have many roles to play and striking with the new ball will be of prime importance. A high-scoring game can be expected.

The Three Lions are most likely to play the same eleven. Jason Roy made an incredible comeback after the injury layoff. Jonny Bairstow finally showed his brutal self with a ton in the previous match. Joe Root has been the Brits’ standout batsmen with 476 runs at 68. Ben Stokes has scored four half-centuries and he has shown good form. The onus will also be on Eoin Morgan in the middle order.

Jos Buttler needs to show a bit more consistency. In the bowling department, Jofra Archer and Mark Wood have been England’s standout performers with 16 and 13 wickets respectively. Liam Plunkett came back into the eleven, picking up three wickets. Chris Woakes has done reasonably as well. There are concerns over the form of Adil Rashid, who hasn’t been effective at all in the mega event.

The Black Caps are likely to bring back Matt Henry in place of Ish Sodhi, who only bowled six overs without a wicket in the previous match. Their opening muddle is yet to be solved. Henry Nicholls came in place of Colin Munro, but couldn’t make an impact. Martin Guptill hasn’t got going by any means. Ross Taylor and Kane Williamson have to remain at their very best in the middle order.

Williamson has also chipped in with some useful wickets as a part-timer. Tom Latham is a decent batter, but the tournament has turned out to be a disaster for him. Colin de Grandhomme and James Neesham have done their bit down the order. Boult got a fifer in the last match and that would keep him in good stead. Ferguson has hurried batsmen with his pace, having picked up 17 wickets. 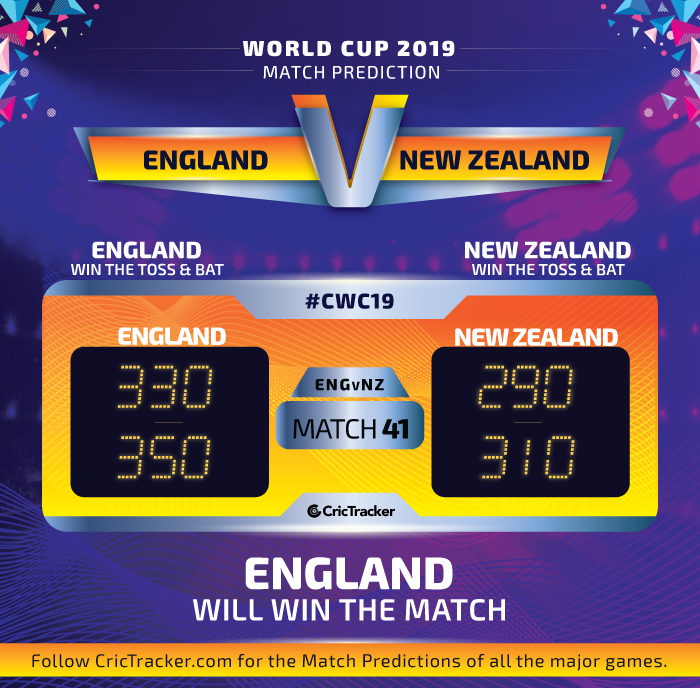