New Zealand will kick the tournament off with their first four games against the teams from the subcontinent.

New Zealand is one of the most-deserving teams which is yet to win an ICC 50-over World Cup. The team reached in semi-finals in the first two editions of the tournament. Furthermore, they have got to the penultimate stage of the competition four more times in 1992, 1999, 2007 and 2011. However, it was only in 2015 that they managed to break this semi-final jinx.

In this edition of the tournament, they managed to get into the final. However, they were outdone by their Trans-Tasman rivals, Australia. That was one of the worst heartbreak moments in the history of New Zealand Cricket. Heading into the upcoming edition of the World Cup, the Blackcaps look strong yet again. They were the first out of the ten teams to name their 15-man squad and look extremely well balanced.

Will Kane Williamson fulfil the dreams?

Kane Williamson will be leading the side in 2019. They have got Martin Guptill as one of the openers while they are quite flexible about the other. Ross Taylor, Tom Latham and Henry Nicholls form the crux of the middle order. Moreover, the Blackcaps have got some of the best all-rounders in the form of Mitchell Santner, James Neesham and Colin de Grandhomme. Tom Blundell came as one of the biggest surprises in the team.

The bowling also looks sorted for New Zealand. They have gone with a pace-heavy attack and will bank a lot of hopes on the leader of the attack, Trent Boult. Tim Southee, Matt Henry and Lockie Ferguson are amongst the other options that are available for the team.

New Zealand will be playing their first game at the Sophia Gardens in Cardiff against Sri Lanka. This will be followed by the games against the teams from the subcontinent – Bangladesh, Afghanistan and India. South Africa, Windies, Pakistan and Australia follow next. The side will wrap up the league stages with the game against the hosts, England. 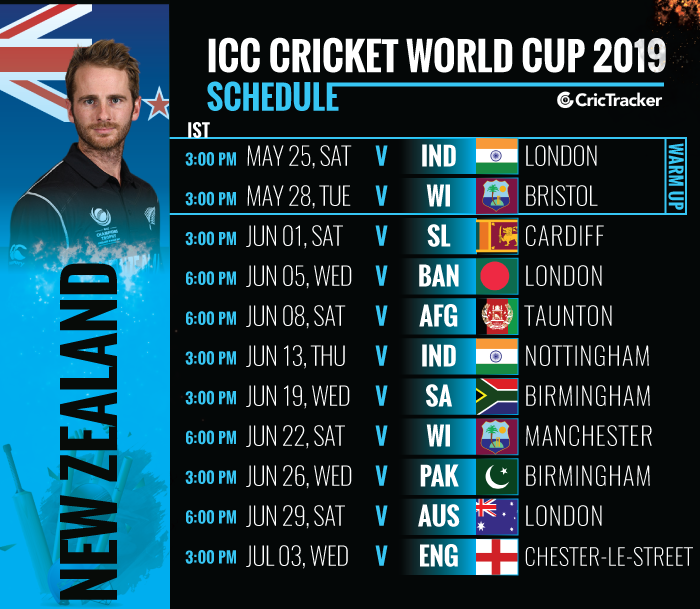