Ndola Blitz is expected to continue their domination in this match as well. 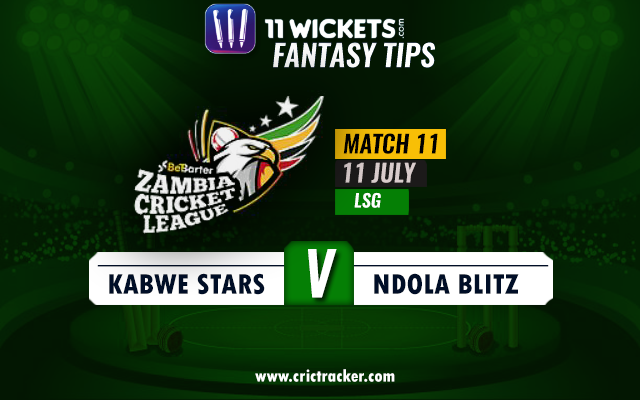 The 11th match of Zambia Cricket League 2020 will be played between Kabwe Stars and Ndola Blitz at Lotus Sports Club Ground in Kamwala.

Live streaming of this match will be available on CricTracker’s YouTube channel.

Ndola Blitz has been dominating thus far in the competition with three wins and one defeat, they are currently on top of the table. Blitz will aim to continue the same winning momentum when they meet Kabwe Stars on Saturday.

On the other hand, Stars lost two games and won two matches so far in the competition. They will look forward to bringing some more strength to their line-up in order to get better position on the points table.

There is no rain forecast as per AccuWeather and we can expect the full game to happen.

The average first innings score is 86 thus far in the tournament’s eight matches. Interestingly, chasing teams won six out of those 8 matches. If a team wins the toss, they will most likely elect to bowl first in order to chase and win the game.

Ndola Blitz’s players are in brilliant form. Picking their players as multipliers can be a wise choice for your head to head and small leagues.

Ndola Blitz is expected to continue its domination in this match as well.