Shakib Al Hasan is a good captaincy choice for this match. 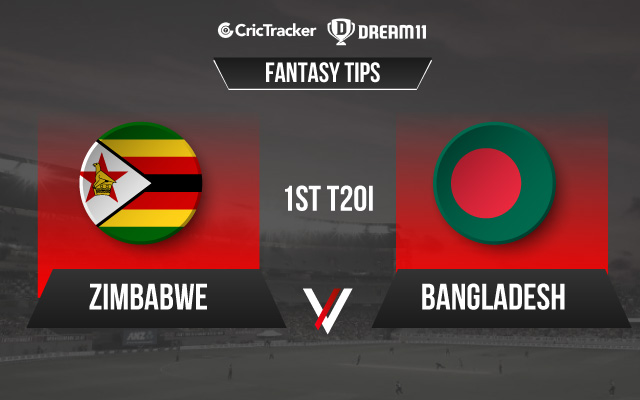 After a totally one-sided ODI series that saw Bangladesh hammering the Zimbabwe side 3-0, both these sides will lock horns in a three-match T20I series. Bangladesh will enter the series with a lot of confidence after the hammering that they dished out to Zimbabwe in the ODI series.

Zimbabwe, on the other hand, will look to start the T20I series with a win and hope for a reversal of fortunes. Bangladesh will look to continue from where they left off in the ODI series.

Where to watch live: FanCode

The pitch at Harare is a decent one for batting, and the willow wielders will definitely get value for their shots. The weather is expected to be clear for most of the day. The team that wins the toss should look to put runs on the board.

Top Picks for ZIM vs BAN

Wesley Madhevere scored a handy 56 off 63 deliveries in the 2nd ODI between Zimbabwe and Bangladesh. He is a batsman who can dent the opposition bowling attack once he gets going. Madhevere has scored 205 runs at a strike rate in excess of 120 in T20I cricket.

When and Where to Watch Sri Lanka vs India Live Streaming, Match Preview, Timings, and Pitch Report for 1st T20I

What happened in the cricket world today - July 24

Shakib Al Hasan won the Player of the Series award in the ODI series between Zimbabwe and Bangladesh. He performed exceedingly well with both bat and ball. If Shakib can continue with his good run with the willow, then there will be problems for Zimbabwe. Shakib is the 2nd highest run-scorer and the highest wicket-taker for Bangladesh in T20Is.

Sikandar Raza produced a good performance with the willow in the ODI series against Bangladesh. While he scored 30 runs in the 2nd ODI, he contributed a handy 54-ball 57 in the third rubber. Raza has scored 520 runs and taken 13 wickets for his side in T20Is.

Mustafizur Rahman was the pick of the bowlers for Bangladesh in the 3rd ODI against Zimbabwe. In the 9.3 overs that he bowled, the left-arm seamer picked up 3 wickets to constantly put the pressure on the opposition.

Regis Chakabva was in good form in the third ODI between Zimbabwe and Bangladesh. He scored 84 off 91 deliveries and enabled the Zimbabwe side to post a good total of 298 on the board.

Liton Das scored a classy 102 off 114 deliveries in the first ODI between Bangladesh and Zimbabwe and helped his side thrash their opponents by 155 runs. Das is a handy pick for this match.

ZIM vs BAN Must Picks for Dream 11 Fantasy Cricket

Suggested Playing XI No.1 for ZIM vs BAN Fantasy Cricket

Luke Jongwe might leak runs, but he is someone who can also take wickets as well. You can take the gamble and make him the skipper of your side.

Soumya Sarkar can take the game away from the opposition. Even though he might have got two single-digit scores in his last three T20Is, he is a player you can bet on.

Players you should avoid

Ryan Burl is someone who has not got too many opportunities to prove his worth with both bat and ball. Avoid him in your side.