After winning the Test and ODI series, Bangladesh will be aiming to win the T20I series as well. 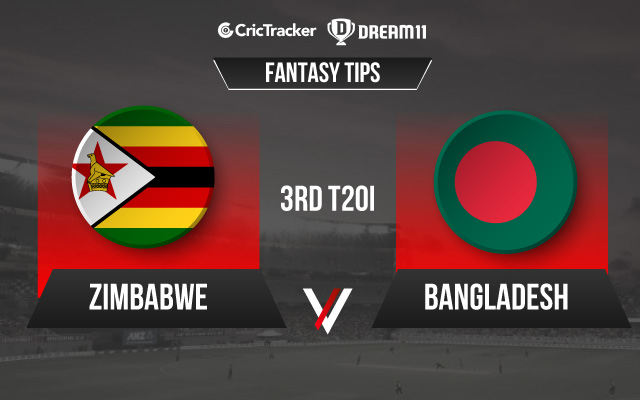 Wesley Madhevere’s batting brilliance and bowlers’ collective performances gave Zimbabwe a 23-run victory in the 2nd T20I against Bangladesh. Now the series is levelled at 1-1 and the decider will be played on Sunday. Zimbabwe bowled impressively while defending the target of 167 and picked wickets regularly.

On the other hand, Bangladesh tasted their 1st defeat on this tour. They have played some real quality cricket, winning the Test and ODI series. However, the Tigers were outplayed by a better team on a given day in the 2nd T20I. None of the top 7 batters in the run-chase could play a long knock, which handed them a loss.

The curator has done an incredible job in providing an excellent surface for all the matches played throughout this series. It’s a neutral wicket that will assist both batters and bowlers. Having said that, the wicket slows down in the latter half, and hence batting first will be a good option.

Wesley Madhevere played one of the best knocks of the series in the 2nd T20I, when Zimbabwe needed him the most. He scored 73 runs from 57 balls, which included 5 fours and 3 sixes.

Soumya Sarkar wasn’t able to repeat the similar performances of 1st T20I in the 2nd T20I. Still, he is a reliable player and we can expect him to do well in the decider.

Ryan Burl is playing the finisher’s role for Zimbabwe. He smashed the Bangladeshi bowlers in the death overs in the 2nd T20I, and scored 34*runs from 19 balls, which comprises of 2 fours and 2 sixes.

Shakib Al Hasan hasn’t delivered to his standards with the bat in this series, as he has managed to score only 12 runs in 2 matches. However, he picked 2 wickets at an economy of 7.5. He is a skilful player and we can expect good performance from him in the 3rd T20I.

Wellington Masakadza was the pick of the bowlers from Zimbabwe in the 2nd T20I. He picked up 3 wickets by conceding 20 runs in his full quota of 4 overs.

Shoriful Islam again stole the show for Bangladesh with the ball. He picked up 3 wickets in the 2nd T20I and too his total tally of wickets to 5 in this series.

Regis Chakabva is a must pick for your fantasy teams. He is an aggressive batter and has got enough firepower to clear the fence. In 2 matches in this series, he has scored 57 runs at an average of 28.5.

Dion Myers is a decent striker of the ball. In 2 matches in this series, he has scored 61 runs at a strike rate of 141.86. It’s worth a risk to make him your fantasy team skipper.

Mahmudullah hasn’t fired in the last 2 matches, as he managed to score only 19 runs at a strike rate of 105.55. That being said, he is a vastly experienced campaigner and you can take a risk and pick him as your fantasy team skipper.

Since the all-rounder’s slot is completely packed with talented players, it is difficult to pick Mahedi Hasan in the fantasy eleven.