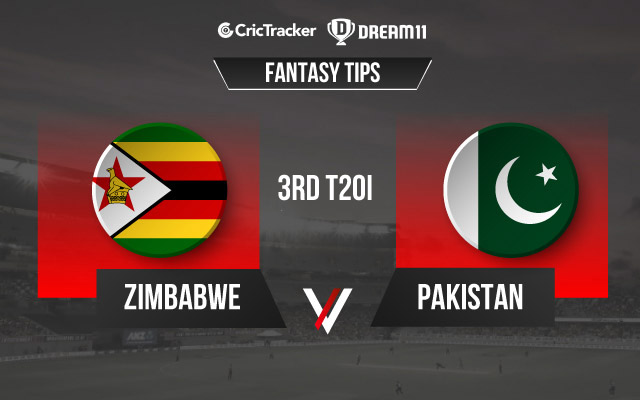 Zimbabwe pulled off a miraculous win in the 2nd T20I against Pakistan to level the series 1-1. It wasn’t easy for them to defend the target of 119 but they did a fabulous job and won the game by 19 runs to take the series to the decider, which is to be played on Sunday.

Pakistan faltered in the run-chase in the 2nd T20I and paid a high price for that as they lost the match by 19 runs. It was an eye-opener for them as they are completely dependant on the top-order batsmen. They are still the favourites to win this series, but will have to avoid making the same mistakes.

The surface will get completely slowed down in the latter of the half and we have witnessed the same in the last two games as well. Batting first will be an excellent choice on this track.

Also Read: ‘I was very emotional, didn’t know how to face my teammates’ – Andre Russell on sitting dejected on the staircase in KKR vs CSK match

Though Tinashe Kamunhukamwe is not scoring at a brisk pace, he held his end scored and 29 and 34 runs in the 1st and 2nd T20Is respectively. He is likely to continue to play according to the plans.

Skipper Babar Azam was the top scorer for Pakistan in the losing cause in the 2nd T20I, scoring 41 runs from 45 deliveries. He is a must-pick player for your Dream11 fantasy team.

Ryan Burl turned the game in favour of Zimbabwe in the 2nd T20I by picking up the huge wickets of Fakhar Zaman and Mohammad Hafeez.

Luke Jongwe was the player of the match in the 2nd T20I for his incredible bowling performances. He picked up 4 wickets at an economy of 4.7 runs per over, and not to forget, he is a good batter lower down the order as well.

Blessing Muzarabani has been impressive with his economical bowling in the first two matches. He has picked up 2 wickets at an economy of 5.75.

Leg-spinner Usman Qadir has been bowling well in this series and utilizing his variations well. He has scalped 4 wickets at an economy of 7.12 with the best figures of 3/29.

Pakistan are heavily reliant on Mohammad Rizwan at the top of the order. He has scored a huge amount of runs in all forms of the game in the past 6 months. He will play a major role in the deciding 3rd T20I.

Brendan Taylor was short of runs in the last T20I against Pakistan, but is a brilliant wicketkeeper-batter and can fire in this game.

Usman Qadir will be really handy on this slow pitch and he has done a commendable job with the ball in the first two matches.

Veteran cricketer Mohammad Hafeez is not playing up to his standards in recent times. He has scored only 10 runs with the bat in the last 2 matches. Considering his current form with the bat, you can avoid him while making your fantasy teams.