ZIM vs AUS, 6th T20I, Match Prediction: Who will win the match?

Zimbabwe vs Australia 6th T20I – Match Prediction: Who will win the match Zimbabwe or Australia?

Will Zimbabwe step up to the task finally?

The final league game of the ongoing tri-series is of no context at all. But the hosts will have a point to prove about their ability in the absence of five of their key players. They have been thumped in all the three matches before but looked a better unit in the previous encounter against Pakistan. But Australia have been too good for them and after losing the game on Thursday, they will be in no mood to experiment going into the final on Sunday.

Hamilton Masakadza must have been pleased with the fact his bowlers managed to take the game to the last over against Pakistan and would be hoping that they continue in a similar way. Their batting also looked good as the home side lost only 4 wickets in 20 overs. The perfect match might be around the corner for them.

Australia must have realised that their batting is way too dependent on Aaron Finch after the heavy loss they were handed by the Men in Green. The other batsmen will have to step up in this game and get ready for the title clash. The bowlers also have to come to the party who have now made it a habit to lose their way at the death. Zimbabwe game will provide them with a chance to redeem themselves for the big game which is coming up on weekend.

The pitch at the Harare Sports Club has held up well in this series so far. The game between Australia and Pakistan was full of runs but it slowed down a bit later in the game. The same will be the case for this match as well and expect for their side winning the toss to bat first. As far as the weather is concerned, the conditions are pleasant for the game of cricket to take place.

Zimbabwe made some changes for the last game and looked at their best. They should field the same side for this encounter as well and hope that they put things together better and upset the mighty Aussies in a dead rubber. Hamilton Masakadza, as a skipper, has not led from the front and he might open up and play an explosive knock. Even Soloman Mire has to continue his good form to threaten the opposition in the powerplay overs at least.

The bowling attack is in good shape it seems as they stretched Pakistan to the 20th over while defending the total of 162 runs. They will only have to repeat all the good deeds they did in the last match.

Something is wrong with D’Arcy Short and his batting. He has looked a pale shadow of himself and is down on confidence on this tour. He might get dropped finally after continuous failures and Alex Carey should open along with Aaron Finch. The rest of the batting line-up should be same even as Mitchell Swepson’s leg-spin might get introduced for the first time in the series. His inclusion will bolster the bowling attack which looked under pressure in the game against Pakistan.

The prediction is for Australia to beat the home side and go into the final with a confidence boosting victory. 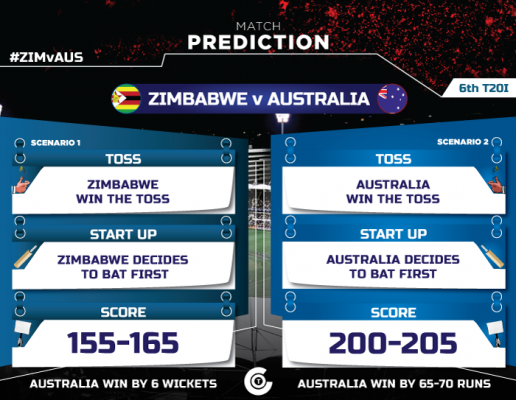