The 2nd match of Men’s Cricket in the 2019 South Asian Games will be played between Bangladesh Under-23s and Maldives at the Tribhuvan University International Cricket Ground in Kirtipur.

Bangladesh Under-23s will start their campaign in the 2019 South Asian Games on Wednesday when they face Maldives at the TUIC Ground in Kirtipur. The Bangladesh team is considered to be the strongest of the five teams in the competition and are front runners to win the Gold medal. Soumya Sarkar is easily the biggest name in this tournament and is likely to be the top performer as well. The Maldives, on the other hand, will be hoping to put on a good show despite not having enough firepower in their line-up.

The Wednesday morning will witness low temperatures in Kirtipur but no rain is forecasted during the match timings.

The Tribhuvan University Ground in Kirtipur produced a high-scoring match on the first day of the Men’s cricket event in the 2019 South Asian Games. Sri Lanka U23s chased down the 170+ target despite losing wickets at crucial stages. A batting track can be expected since this match between Bangladesh and Maldives will be the first of the day at this venue.

Soumya Sarkar will be crucial as captain considering him bowling four overs as well. Ahmed Hassan has aggregated 479 runs and claimed 20 wickets from 30 matches for the Maldives in all formats. The Maldives skipper Mohamed Mahfooz took 47 wickets from 37 matches for his team in all forms. Naim Sheikh will be the player to look out for as he produced some good knocks on Indian tour. 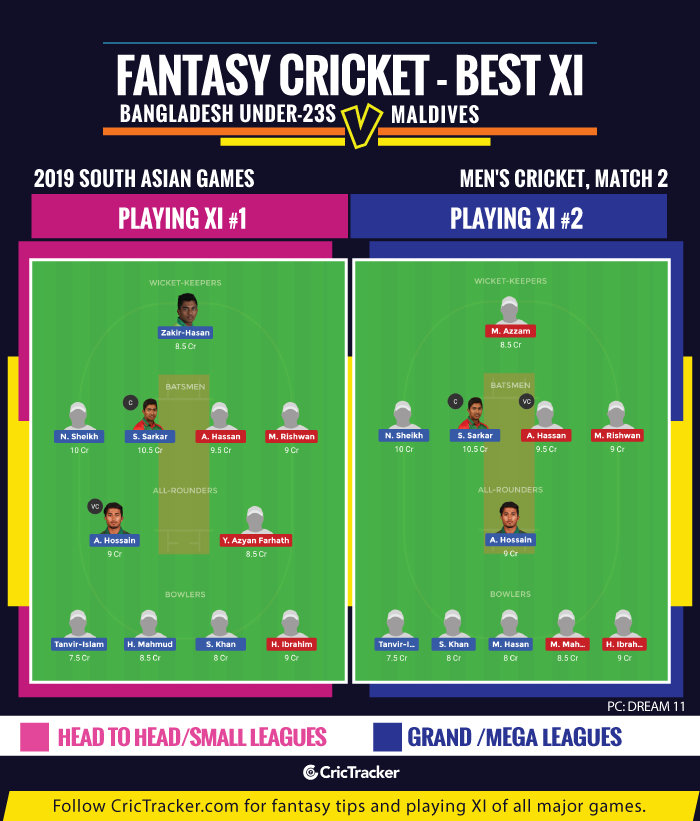 Bangladesh Under-23s are going to field a pretty strong team. The quality in their squad is pretty high and could well thrash the Maldives team. Hence, picking as many players as possible from the Bangladesh team will be the way to go forward.

Sri Lanka Under-23 side is expected to start the tournament with a victory.