Kamindu Mendis picked two wickets in the match against Nepal but missed out with the bat.

The 3rd match of Men’s Cricket in the 2019 South Asian Games will be played between Bhutan and Sri Lanka Under-23s at the Tribhuvan University International Cricket Ground in Kirtipur.

The Sri Lanka Under-23s started off the Men’s Cricket in the 2019 South Asian Games with a comfortable win over the home team Nepal. The Lankan team successfully chased down the target of 173 with five balls and six wickets to spare. Shammu Ashan’s unbeaten 44-ball 72 played a key role in the run-chase. The right-hander struck five maximums and four fours during his match-winning effort. In their second match, the Lankans will be up against Bhutan team on Wednesday. The Bhutan team is yet to make an appearance in an official International match. They could be seen making their T20I debut later in this competition.

The University Ground in Kirtipur will be under clear skies throughout Wednesday and no rain is expected during the match timings.

The 2019 SAG Men’s cricket event started with a high-scoring match. However, the match between Bhutan and Sri Lanka U23s will be the 2nd of the day to be hosted by the Tribhuvan University Ground in Kirtipur. Hence, the pitch for this match could be slightly slower especially in the 2nd innings. Even a total of 140 will be good enough to be defended in such conditions.

Pathum Nissanka showed his approach in the T20 format with a quickfire 12-ball 30 against Nepal. He could score a big one against Bhutan on Wednesday. Kamindu Mendis picked two wickets in the match against Nepal but missed out with the bat. Jigme Singye picked up 40 wickets for Bhutan and also amassed 498 runs in 35 matches played. Tenzin Wangchuk has claimed 15 wickets across 16 innings for Bhutan team including unofficial matches. 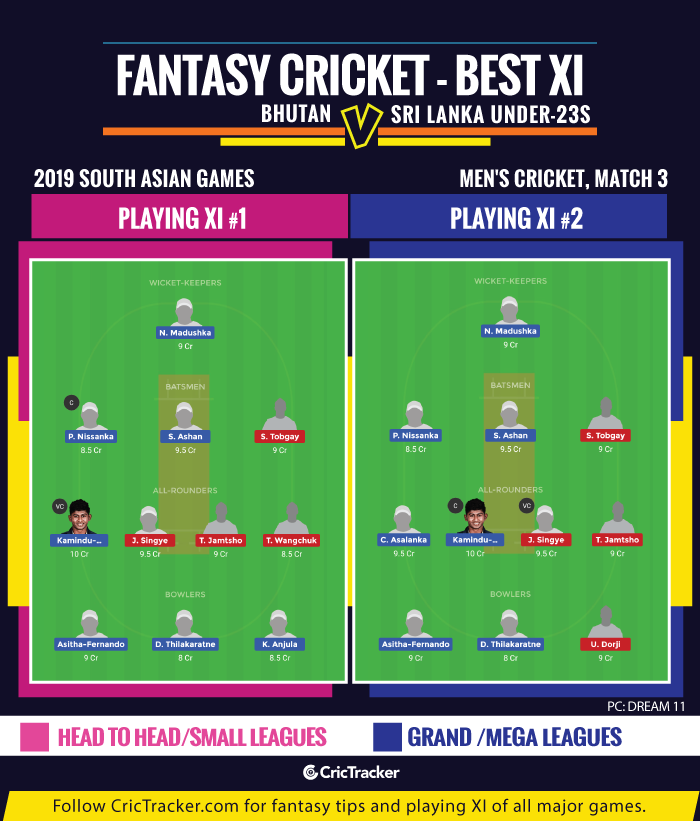 There are two players named Thinley Jamtsho in Bhutan squad. But only one of them is included in the Dream11 list. The available name has vast experience for the Bhutan team. He scored 416 runs across all formats and also picked up 25 wickets only from 34 matches played.

Sri Lanka Under-23s are expected to register their 2nd straight win of the tournament.