Asitha Fernando took a wicket each in the two matches.

The 5th match of Men’s Cricket in the 2019 South Asian Games will be played between the Maldives and Sri Lanka Under-23s at the Tribhuvan University International Cricket Ground in Kirtipur.

Sri Lanka Under-23s are cruising in the Men’s Cricket of the 2019 South Asian Games as they registered back to back wins. They chased down 173 against the home team Nepal in the competition opening match. On Wednesday, they thumped Bhutan with a huge 173-run win. The Lankan U23 team posted 248/4 in their 20 overs while Bhutan team were bowled out for only 75. They will now take on the Maldives on Thursday as they aiming to qualify for the Gold Medal match. The Maldives suffered a 109-run loss against Bangladesh U23s as they were bowled out for only 65 chasing a target of 175.

The University Ground in Kirtipur is forecasted to be under clear skies during the match between Maldives-Sri Lanka U23s.

The average scores in the 2019 SAG Men’s cricket event might not matter given the difference in quality between the teams. If Sri Lanka bats first, we could see at least 200 runs on the board but less than 100 if the Maldives be the batting first team.

Ahmed Hassan has aggregated 479 runs and claimed 20 wickets from 30 matches for the Maldives before this tournament. He was one of the two players to get into double digits on Wednesday. Pathum Nissanka is expected to be top performer once again considering the way he has been batting in this tournament. He could end up scoring big runs if Sri Lanka bats first again. The Maldives skipper Mohamed Mahfooz was one of the three players to claim a wicket against Bangladesh U23s. He took 48 wickets from 38 matches for his team across all formats of the game. 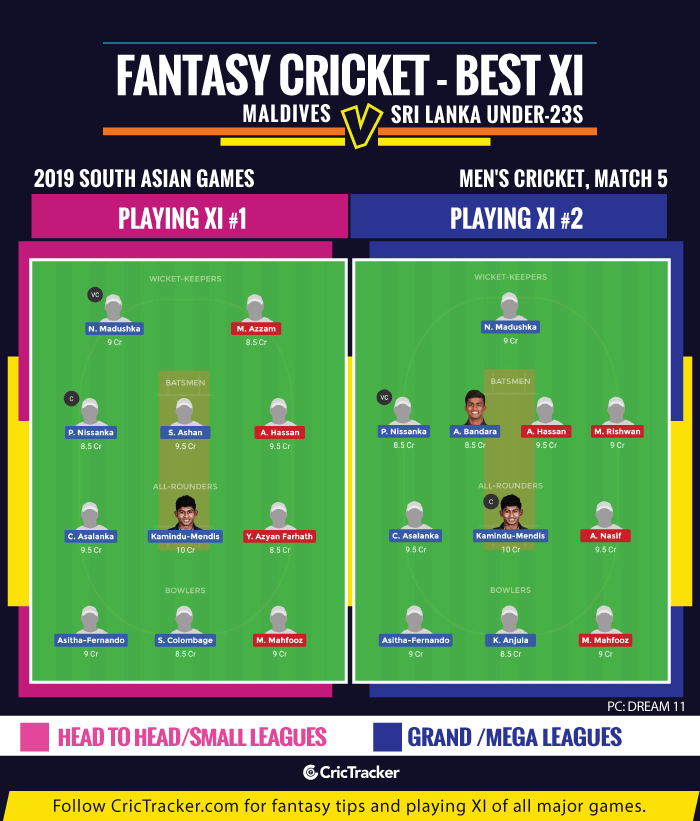 Considering the way Sri Lanka U23s thrashed Bhutan on Wednesday, Maldives could face a similar situation in their 2nd match on Thursday. If Sri Lanka bat first, most of their batsmen will get a chance but if they bowl first, only openers could be seen getting a chance.

Sri Lanka Under-23s are expected to extend their winning streak to three matches.