Leem Shafeeg bowled a brilliant spell in the previous match against Nepal and took three wickets for his side.

The 9th match of Men’s Cricket in the 2019 South Asian Games will be played between Bhutan and Maldives at the Tribhuvan University International Cricket Ground in Kirtipur.

Bhutan and Maldives are still due to taste their first win in South Asian Games. So, both the teams would be eager to end their tournament on a high note with a win.

The batting line up of Bhutan is struggling to pile some runs for their bowlers to defend. Their batsmen would be expected to come out with some convincing performances in the upcoming match. So far in their three outings, Bhutan has failed to go past 100 runs in an innings.

With the likes of Mohamed Rishwan, Ali Ivan and Umar Adam, Maldives has a strong batting line up.  Moreover, their bowling unit has also done well in the ongoing tournament. Leem Shafeeg was the best bowler for his side in the previous match against Nepal, who grabbed three wickets for his side. It would be interesting to watch he can successfully replicate his form in the upcoming match as well.

There are no chances of rain and it is expected to be a perfect day for a cricket match. However, the temperature is expected to range between 19 and 22 Degree Celsius according to Accuweather.

The wicket at Tribhuvan University International Cricket Ground is expected to go in favour of batsmen. Moreover, they will get an opportunity to pile some big runs against the bowlers. However, in the latter part of the match spinner will also play an important role. The team winning the toss will look to bat first according to the trends. 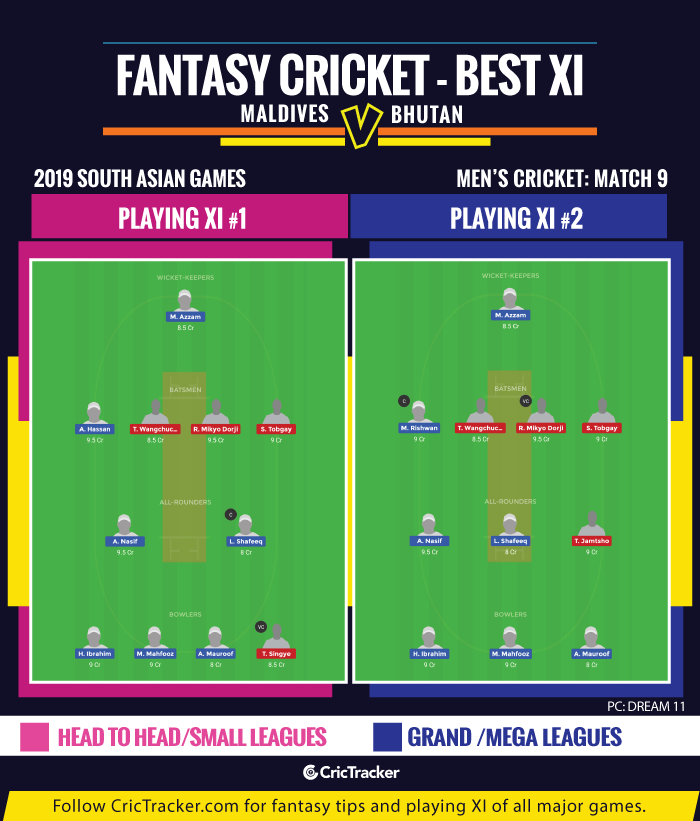 Umar Adam, the top-order batsman of Maldives is a brilliant hitter but currently, he is struggling with his poor form. He is expected to give breakthrough performances in the game against  Bhutan. He is a risky pick but will be worth for any Grand League Side.

Both the sides might opt for some change. However, the majority of the players will play as mentioned above. But it will be wise to wait for the confirmed playing XI.