27th March 1994: The 'nod of approval' from Mohammad Azharuddin that catapulted Sachin Tendulkar to everlasting greatness in ODI cricket

27th March 1994: The ‘nod of approval’ from Mohammad Azharuddin that catapulted Sachin Tendulkar to everlasting greatness in ODI cricket

It was the ‘nod of approval’ from Mohammad Azharuddin that allowed Sachin Tendulkar to become the batting deity of an entire nation. 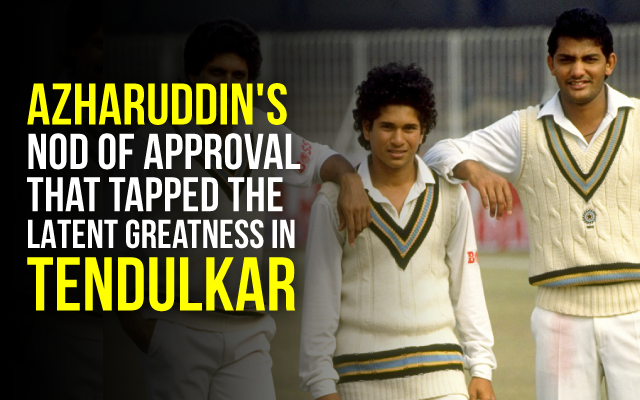 On 27th March 1994, India’s regular opener Navjot Singh Sidhu was injured and was not in a position to take the field against New Zealand. And, when the Indian side was frantically looking for a replacement, a young boy just out of his teens asked his captain to give him a chance. Sachin Tendulkar put his hand up and told his captain that he will walk out to open the batting for his country against New Zealand.

Azharuddin gave his ‘nod of approval’ to Tendulkar. And so, out walked the 20-year-old Tendulkar, with his Blue and Yellow (yes, the Indian jersey had shades of yellow back in 1994) jersey fluttering in the breeze.

The Sachin Tendulkar blitzkrieg that took Auckland by storm

The Kiwis batted first and posted a mediocre total of 142 runs on the board. And in his first outing as an opener, Tendulkar could have taken his time to settle down. But then, this was a situation where he was given complete freedom. And, the 20-year-old prodigy’s batting acquired gargantuan proportions.

Tendulkar’s first boundary in ODI cricket as an opener was a picturesque straight drive down the ground. To a ball that was pitched up, he offered the full face of the blade, and the ball sped down the ground to the boundary. We have witnessed countless straight drives from Tendulkar’s blade in ODI cricket. But cherish this one, as it was his first as an opener in ODIs.

Chris Pringle tried to outwit Tendulkar by bowling a slower delivery, but the diminutive batting genius was up to the task. Sachin Tendulkar picked the change in pace early and smashed the delivery over mid-on for a boundary. And then came a vintage flick from Tendulkar’s willow that raced past mid-wicket. To a ball that was pitched on leg stump, the right-hander brought his dexterous wrists into play and threaded the gap on the leg side with ease.

Then came a backfoot punch that would become another Tendulkar trademark over the years. To a ball that was pitched just short of a good length, Tendulkar rose on his toes and punched the ball through the offside. Danny Morrison then bowled a delivery on his pads, and in the mood that Tendulkar was in, he did not miss out and deposited the white cherry behind square for a boundary.

And then, came the shot of the match. You could be perfectly forgiven if you felt jealous of the 20000 odd people who had turned up in the stadium to witness this first hand. To a delivery that was pitched up by Danny Morrison, Tendulkar just hit the ball through the line and the cherry sped to the boundary at breakneck speed. The crowd was witnessing the birth of a batting colossus. Tendulkar was blossoming like a flower in Auckland, and his fragrance was spreading fast.

The batting prodigy reached his half-century with a vintage pull past mid-wicket. His half-century had come off just 34 deliveries, at a strike rate of 150. T20 cricket was still a decade away, but Tendulkar was already showing shades of it in Auckland. Gavin Larsen was then deposited into the stands when he bowled a short delivery. The bowler had his hands on his hips, completely helpless. Well, what do you do when a genius expresses himself to his fullest?

Chris Pringle then sprayed a delivery onto Tendulkar pads, and the little batting maestro just flicked him with nonchalance past square leg. Tendulkar’s blitzkrieg came to an end when he offered a return catch to Matthew Hart. Out of the target of 143, Tendulkar had contributed 82. And, he had just consumed 49 deliveries to score his runs and had scored them at a strike rate of 167.35. And, these numbers are good even for T20 cricket.

With another silent thank you to Azharuddin for his ‘nod of approval’, let us take a look at the top 5 batsmen with the most runs in ODI history as an opener. 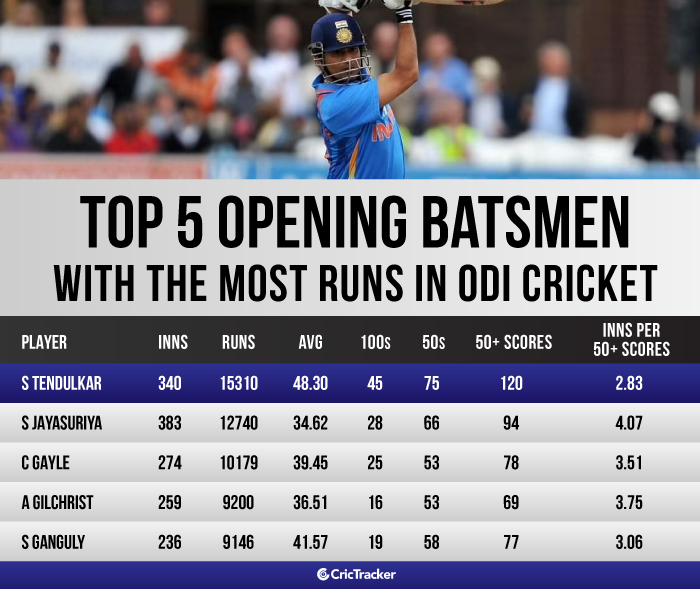 It is clear from the above table that Tendulkar is way ahead of the pack. He leads his nearest competitor, Sanath Jayasuriya by 2570 runs in spite of playing 43 innings lesser than the Sri Lankan legend. Tendulkar also averages a stunning 48.30 as an opener in ODIs, and the man who can come closest to Tendulkar in the above list is Sourav Ganguly, and he averages 41.57.

A Thank You to Mohammad Azharuddin for his ‘nod of approval’

And finally, it was the ‘nod of approval’ from Azharuddin that allowed Sachin Tendulkar to become the batting deity of an entire nation.

Note: All the stats have been taken from Howstat cricket and Cricinfo and have been updated as on 27th March 2021