There are some players who might not get any games to play in the entire season.

The Mumbai Indians (MI) are known to identify some of the finest talents in the country. Often, they pick unknown commodities at the IPL auction and sometimes give at least a couple of chances to some of these players. For instance, in IPL 2019, the team gave young Rasikh Salam a chance to play right in the first match.

While there are such surprises that pop up at times, not everyone is fortunate enough. There are some players who might not get any games to play in the entire season. Yet, it is always a great learning curve given that the MI squad and the coaching staff is studded with some of the biggest stars. Rubbing shoulders with some of the players in itself is a massive experience.

Here are five players MI might not pick in the XI for IPL 2020: 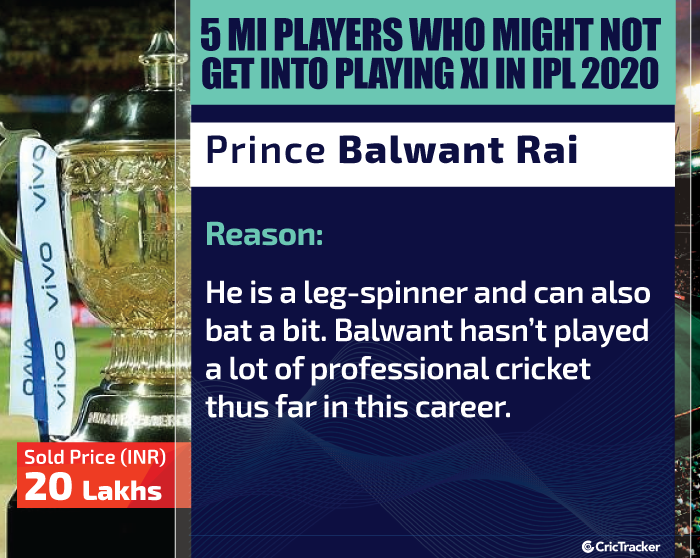 The MI management made an interesting pick during the auction event in Kolkata. They surprised many when they chose to go ahead with a completely unknown player – Prince Balwant Rai. Balwant was born in 1999 and is just 20 years old now. He is a leg-spinner and can also bat a bit.

Balwant hasn’t played a lot of professional cricket thus far in this career. He represented the Punjab U16 team earlier. It will be a great experience for him to be in the MI dressing room and practice along with the likes of Rohit Sharma, Jasprit Bumrah and others.