Michael Vaughan has already stated that Naseem and Shaheen could be the next Waqar and Wasim.

Over the years, Pakistan has been a fast bowling factory, producing one skilled pacer after the other.  Nobody has figured out their secret sauce yet. Their tape- ball cricket culture, where a tennis ball is wrapped in tape giving it greater weight, speed and distance is said to be one of the reasons.

But that surely cannot be the only one. They have been gifted with quality fast bowlers like India has been gifted with batsmen. Right from Imran Khan to Wasim Akram and Waqar Younis to the likes of Shoaib Akhtar and Mohammad Amir, they have produced several raw, exciting and lethal speedsters over the years. While in recent times we haven’t seen any of the Pakistani pacers attaining glorious feats, the new crop of pacers coming in is exciting for Pakistan as well as world cricket.

Pakistan has done well in England in the last two series they have played. While in 2016 they drew 2-2 in a fiercely competitive series which also saw the famous ‘push up celebration’ from the men in green, the 2 match series in 2018, went 1-1 as well, with both teams winning a game each, and doing so quite comprehensively. Pakistan has done considerably well in England as compared to other teams from the subcontinent especially India.

Challenges are harder this time around for Pakistan

In 2016, Pakistan had an extremely balanced and experienced squad with their stalwarts Misbah ul Haq and Younis Khan still around, two strong leaders and run machines in their own right. They played an integral part in the series along with seasoned campaigners like Mohammad Amir and Wahab Riaz leading the pace department.

While the batting was without the legends in 2018, they still possessed a potent and experienced bowling attack. This time around, from the bowling trio which is expected to play a crucial role in the series, only Mohammad Abbas, who had a phenomenal series in 2018, has experience of playing in England.

The other two youngsters, Shaheeh Afridi, 20 and Naseem Shah,17 will be playing their first series in the foreign conditions of England and it is sure to be a humongous challenge for them. However, this trio brings along with it pace, accuracy and swing and Pakistan’s biggest opportunity to win a series in England.

Mohammad Abbas, the most experienced of the lot, is easily one of the most accurate and skilled bowlers around. He made his debut in 2017 and since then has had an impressive career picking 75 wickets in 18 matches. He’s not an out and out pace bowler and operates in the late 120s but has the ability to relentlessly bowl in the channel outside the off stump.

He can swing the ball both ways and has modelled his bowling over the great Glenn McGrath and Mohammad Asif. He is going to be a big threat for the English batsmen who have themselves been susceptible to swing bowling in the recent past.

In the 2018 series he played, he was a thorn for the Englishmen, picking 10 wickets in 2 matches, and comfortably outbowled legends James Anderson and Stuart Broad in their home conditions, taking home the player of the series award as well.

He had also received high praise from none other than Dale Steyn. Steyn had tweeted ‘ I see a new number 1 Test bowler coming… Mohammad Abbas’ after Abbas’ superlative performance against Australia in UAE in 2018, where he picked 17 wickets in 2 matches, generally a difficult place for bowlers to do well. The conditions in England are going to suit him once again and England would be wary of what will come their way from Abbas.

Naseem has only played 4 Tests and is yet being touted as the next big pace sensation. Naseem had played just 7 first-class matches before being picked by Pakistan for their Australia tour last year. The 27 wickets he picked in first-class matches weren’t extraordinarily high in number, but his raw pace, accuracy and fearless bowling convinced the selectors he’s meant to be playing in the big league.

While he picked just one wicket at the Gabba against Australia, he consistently bowled in excess of 140km/h and impressed one and all. He then went back to Pakistan, where Test cricket was being played after 10 years and took a fifer against Sri Lanka and followed that up with a hat-trick against Bangladesh, becoming the youngest to do so. 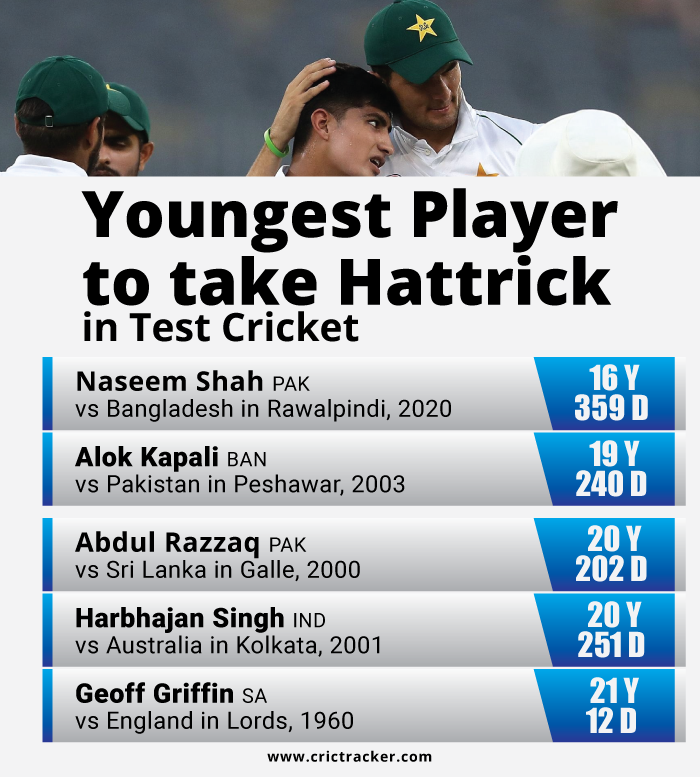 Sometimes you don’t need stats to convince you of a player’s potential. You back your instinct and purely what you see. Naseem Shah has been picked this way, but despite early days in international cricket, he looks to be someone who would carry Pakistan’s fast bowling legacy ahead.

Shaheen Afridi has been around longer. He made his debut in 2018 and put in an exceptional performance in the 2019 World Cup picking up 16 wickets in just 5 games, wowing everybody with his pace and accuracy. He reminded everyone of a young Wasim Akram.

While he’s had a fantastic start to his ODI career, picking up 40 wickets in 19 games, he’s had a more than decent start to his Test career as well, picking 30 wickets in 8 games which included a good series in South Africa where he picked up 9 wickets in 2 games at a brilliant strike rate of 40.1.

He’s got an exceptional ability to pitch the ball up and bowl with a lot of guile. He’s already the pace spearhead of Pakistan at 20, and with a calm head on his shoulders,  and abundance of talent, he has the potential to make it very big in international cricket.

There is a lot of ability in this Pakistan pace attack. Along with these 3, they also have the pace of Usman Shinwari and experience of Wahab Riaz in the squad. But Abbas, Naseem and Shaheen are the ones who will be the difference makers. They are the future of Pakistan pace bowling. Michael Vaughan has already stated that Naseem and Shaheen could be the next Waqar and Wasim.

Those are the kind of expectations riding on the youngsters. While Pakistan’s success will depend a lot on how the batsmen are able to handle the swinging conditions, this pace trio of Pakistan offers them a great opportunity to rip through England’s relatively inexperienced batting which hasn’t particularly done well against quality pace. They could help Pakistan finally win a Test series in England. This is their ultimate baptism by fire. This is where the boys would become men.