Rohail Nazir has scored at least 35 runs in all four matches.

The ACC Emerging Teams Asia Cup 2019 comes down to the final where the hosts Bangladesh Emerging Team will take on the Pakistan Emerging Team. The special fact about these two finalists is that they have not lost a game yet in the tournament. Pakistan’s bowling helped them to will all three matches in Group A before they held on to their nerves in the semis against India. Bangladesh has been consistent with both bat and ball. All the four matches they played resulted in big victories for them including the semi-final against the Afghanistan Emerging team.

The first semi-final between Pakistan and India had showers but the 2nd SF between Bangladesh and Afghanistan is expected to finish without any interruptions.

The Shere Bangla National Stadium has been quite inconsistent over the last couple of years. However, the two semi-finals of this tournament were played on similar tracks. There was a bit of movement early on for the pacers and the track gets slow down as the match progresses. A similar pitch could be seen for the final on Saturday.

Nazmul Hossain Shanto continues to lead from the front as he now has 234 runs with help of three fifties from four matches. Soumya Sarkar is only five runs behind and also took 5 wickets bowling a grand total of 31 overs. Rohail Nazir has been quite consistent as he scored at least 35 runs in all four matches. Khushdil Shah has taken 7 wickets from 24.1 overs he bowled and also scored 99 runs. 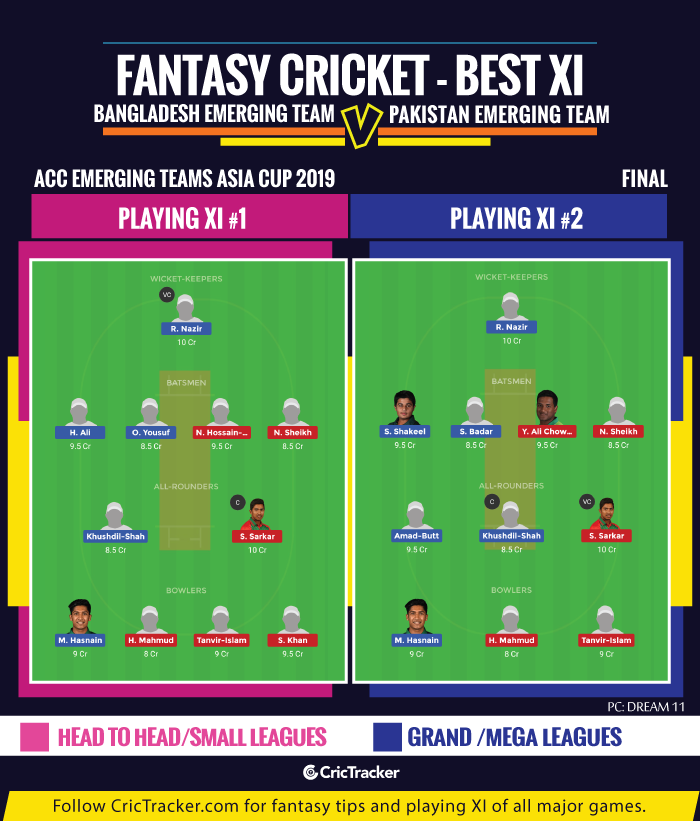 Bangladesh Emerging Team is expected to win the title.