Saud Shakeel has a batting average of 57.36 in List A cricket in the last 15 months.

The Afghanistan Emerging team will face the Pakistan Emerging team in Group A match on Thursday at the SKIC Stadium in Cox’s Bazar. The Afghanistan team has got better of the Pakistan team in age level cricket over the last 1-2 years. They also have come close to defeating Pakistan at International cricket a couple of times recently. The Afghan team will now be led by Samiullah Shinwari, the experienced all-rounder. Saud Shakeel is named as Pakistan team’s captain due to his good batting record in the domestic circuit. The result of this match is likely to make an effect on the chances of playing the knockouts.

This game between Afghanistan and Pakistan is unlikely to be affected by rain as sunny weather is forecasted for Thursday.

The Sheikh Kamal International Stadium has witnessed scores between 220 and 250 regularly. Chasing 270+ won’t be that easy here. Hence teams winning the toss do prefer to bat first only aiming a 270+ total. The batting conditions are best seen in the first half only.

Saud Shakeel has a batting average of 57.36 in List A cricket in the last 15 months. 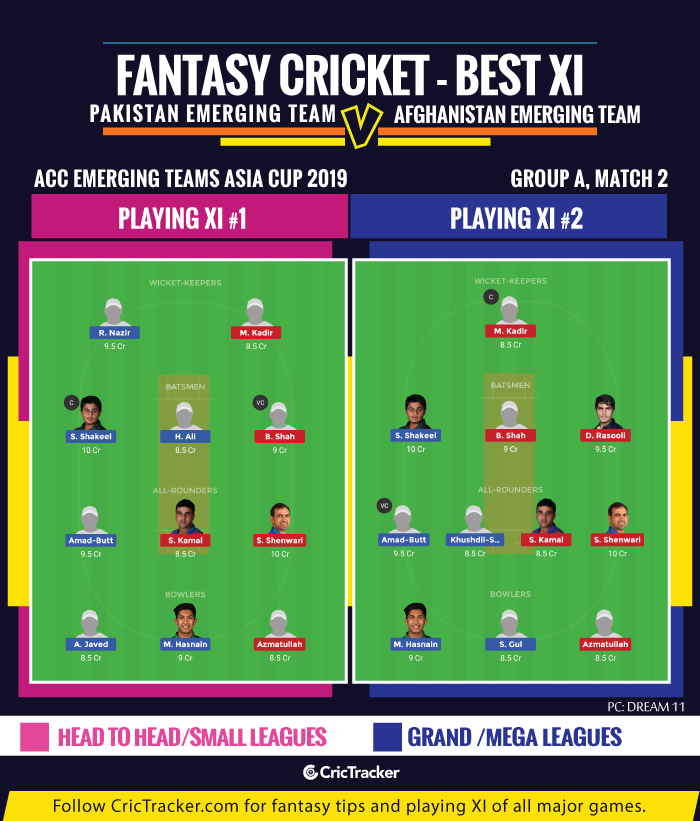 A lot of people have picked Rohail Nazir in the fantasy team going by the reputation. However, he hasn’t produced consistent performances at senior level yet. Hence, Munir Ahmad will be a better option due to his exceptional one-day record in wicket-keepers’ category.

Afghanistan Emerging Team is expected to edge past Pakistan team by virtue of their experience.