BR Sharath will be perfect as captain or multiplier as he averages 35.33 in List A cricket and has affected 25 dismissals in only 12 games.

India Emerging Team finished as the runners-up during the previous edition of the ACC Emerging Teams Asia Cup as they lost a close final to Sri Lanka. This time, under BR Sharath, a young team has travelled to Bangladesh to mark their presence. Their campaign will start with the game against Nepal Emerging Team. This Nepal team is nearly 80% of the regular national team and their new skipper Gayendra Malla takes charge with this tournament. Currently, a few players are missing in both squads due to the ongoing U19 Challenger Trophy in India.

The Savar’s BKSP No.3 Ground is unlikely to receive any rain during the match timings.

The BKSP No.3 Ground has been a high-scoring one recently as four of the last five List A matches witnessed 300+ totals. The recent most game recorded a successful 318-run chase. On Thursday, we could have a high-scoring one especially if Indian team bats first.

Armaan Jaffer didn’t play much One-Dayers at Under-23 level for Mumbai. However, during the CK Nayudu competition last year, Armaan smashed 778 runs in only 11 innings at an average of 86.44. Siddharth Desai had tasted rich success in first-class cricket. In 11 FC matches he played thus far, Desai took 52 wickets with five 5-wicket hauls. He featured in last year’s Youth Asia Cup hosted by Bangladesh and finished with 9 wickets at an average of 12.11. Karan KC starred with both bat and ball during Oman T20I tournament last month taking 11 wickets in four games including consecutive 4-fers.

The Indian skipper BR Sharath will be perfect as captain or multiplier as he averages 35.33 in List A cricket and has affected 25 dismissals in only 12 games. 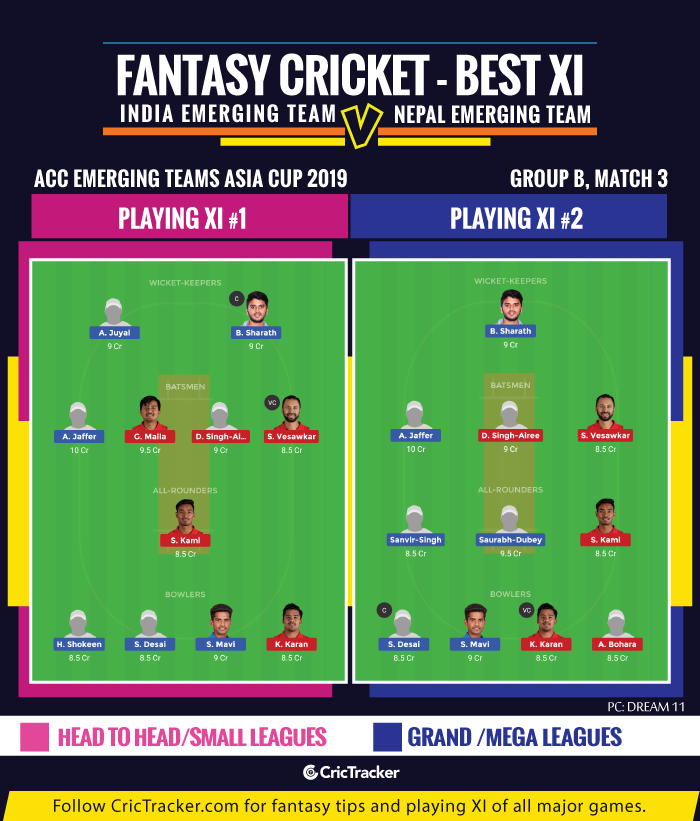 Indian team is filled with a lot of young names who hardly had experience of playing at bigger pool tournaments. However, the quality of the Indian players could still be better than that of Nepal and are likely to dominate.

India Emerging team will be the favourites going into the game.