Soumya Sarkar scored an unbeaten 74-ball 84 in the previous match.

The last year’s runners up India Emerging Team and the home team Bangladesh Emerging team will clash off in a key match in this Asia Cup on Saturday. Interestingly, the senior sides of both countries are part of a Test match in India. Both the teams made a winning start in the tournament. India got through to a 7-wicket win against Nepal while Bangladesh won by 9 wickets against Hong Kong. Soumya Sarkar will hold the key for the hosts while the Indian Emerging team doesn’t consist of any player who has been close to getting into the Indian national team.

The Savar’s BKSP No.3 Ground is forecasted to be under clear skies on Saturday.

The last match broke the streak of 300+ totals at the BKSP No.3 Ground. However, the total of 193 by Nepal was a decent one considering how good the Indian bowlers were on Thursday. We some good batsmen on either side, the game between Bangladesh and India could be a high-scoring affair.

Soumya Sarkar will open the batting and bowl full 10 overs. Naim Sheikh could trouble the Indian bowlers like the way he did during the T20I series. Armaan Jaffer scored an unbeaten 51 in the last match. During the CK Nayudu competition last year, he smashed 778 runs in only 11 innings at an average of 86.44. Siddharth Desai took 52 wickets with five 5-wicket hauls in 11 FC matches and took 9 wickets at an average of 12.11 during Youth Asia Cup last year held in Bangladesh. 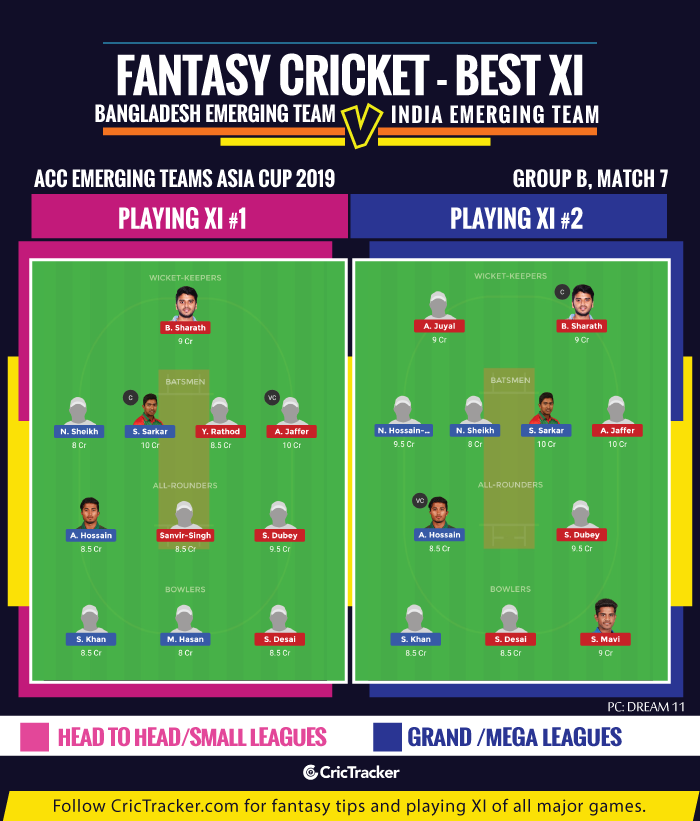 Shivam Mavi didn’t feature in the first match but an injury to Parth R Rekhade could mean he could walk into the XI. Abu Hider Rony didn’t play the first match and we expect him not to play the second match as well.

India Emerging Team is expected to edge past the Bangladesh team.