Pawan Sarraf scored a 49-ball 56 in the game against India.

The 8th match in Group B of the ACC Emerging Teams Asia Cup 2019 will be played between Nepal Emerging Team and Hong Kong Emerging Team at the Bangladesh Krira Shikkha Protisthan No 4 Ground in Savar.

The Nepal Emerging Team and Hong Kong Emerging Team were expected to finish in the bottom half of Group B. As expected, both the teams suffered defeats in their respective first matches. Nepal had an overall better first match as they posted 193 batting first against India and took three wickets defending the total. They even dragged the Indian innings to 42nd over. On the other hand, Hong Kong posted only 164/9 in their 50 overs against the Bangladesh team. The home side needed only 24.1 overs to chase down the target.

No threat from rain is expected at the BKSP No.4 Ground in Savar as clear skies are forecasted for Saturday.

The BKSP No.4 Ground in Savar usually witnesses totals around 250 but on Thursday, Hong Kong were dominated by the home side. As the Saturday’s game is between Nepal and Hong Kong, we might see the batting first side scoring around 260.

Karan KC starred with both bat and ball during Oman T20I tournament last month taking 11 wickets in four games including consecutive 4-fers. He took a wicket and scored 20 runs in the game against India. Kinchit Shah is in the form of his life with both bat and ball at the moment. Pawan Sarraf scored a 49-ball 56 in the previous match and is likely to bowl a minimum of five overs. 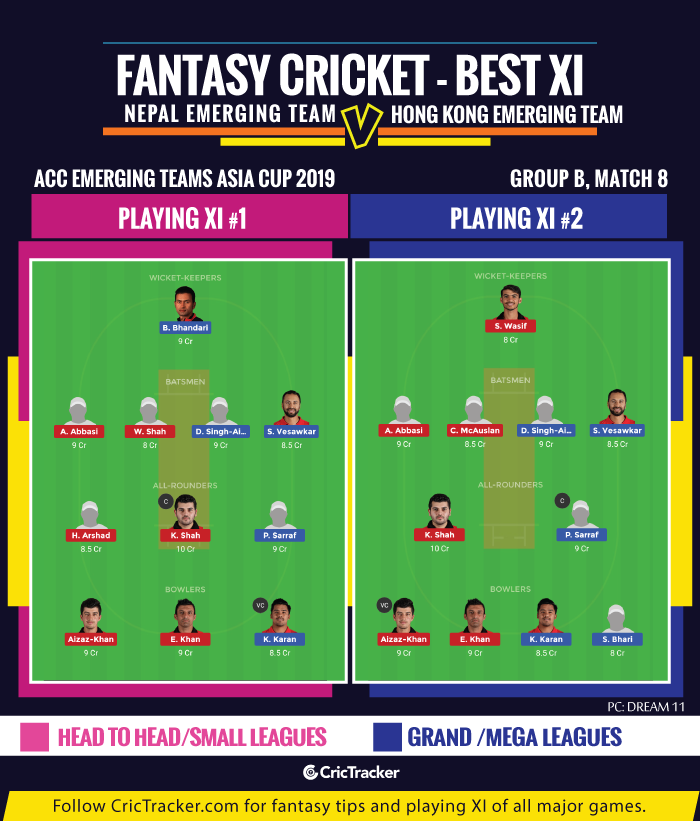 Nizakat Khan didn’t feature in the first match and is expected to miss out against Nepal. He could return to the playing XI against Indian team which will be a big match.

Hong Kong Emerging team are likely to win this fixture.