Mahmudul Hasan Joy scored a century during the Tri-Series final against India.

The final match of the ACC Under-19s Asia Cup 2019 will be played between India Under-19s and Bangladesh Under-19s at the R Premadasa Stadium in Colombo.

The ACC Youth Asia Cup 2019 will come to an end on Saturday after the final at the RPS Stadium in Colombo. India Under-19s and Bangladesh Under-19s will clash off for the title just like the recent most Asia Cup at the senior level where the final was played between the same teams. The two teams entered the finals after both the semi-finals got abandoned due to rain on Thursday.

India topped Group A by winning all three matches while Bangladesh did the same in Group B. The India Under-19s are the defending champions having won the 2018 edition hosted by Bangladesh by defeating Sri Lanka in the final. The current players in both the teams were part of the recent U19 Tri-Series in England. India won the tournament by winning the final against Bangladesh only.

The rain gods are expected to be kind on Saturday and allow the final to be played without any interruption. Scattered Thunderstorms are expected for the weekend but the chances of rain coming down are minimal.

The RPS Stadium in Colombo hosted five Youth ODIs since 2016 and all of them recorded scores between 170 and 210. Spinners pick a lot of wickets here and chasing won’t be any easy. The two matches hosted in this tournament involved Afghanistan who doesn’t have a great batting line-up but probably the best bowling line-up. The scores of their matches might not show the whole picture and 250+ score could be seen in the final.

Towhid Hridoy is a trustable batsman in the current Bangladesh line-up and is one of the three players with two 50+ scores during the Group stage. Sushant Mishra will be a must in the fantasy following his success with the ball. He has taken 7 wickets including a 5-wicket haul in the two matches he played.

Atharva Ankolekar also claimed seven wickets thus far. Mahmudul Hasan Joy, with 193 runs, is the 2nd highest run-getter in this tournament. The 126-run knock against Sri Lanka in the last match boosted his rank in the chart.

Towhid Hridoy could be a safe choice as captain or vice-captain given his recent form. 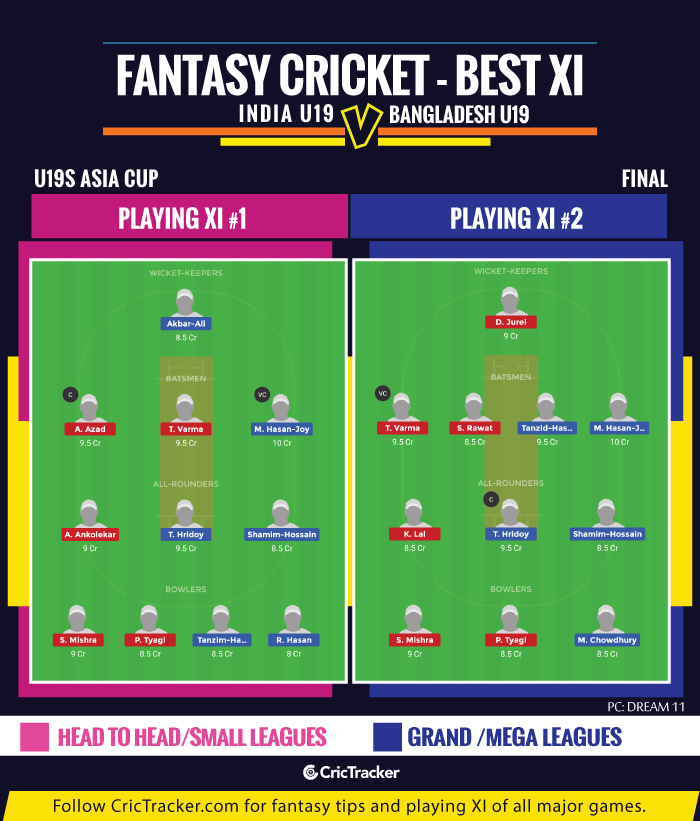 It will be safe to pick more players from all-rounders and bowlers for this game. It is unsure who will play and where will they bat for India while the Bangladesh players in batsmen category have been inconsistent.