The Renegades are set to miss Shaun Marsh for

For the Renegades, their campaign has gone from bad to worse with every passing game. After a victory in their first match of the tournament against the Perth Scorchers, the Renegades have lost 6 matches on the trot. In their previous encounter, the Renegades were hammered by 96 runs by the Perth outfit. Also, the form of their skipper Aaron Finch would be a concern for the Renegades.

The right-hander has aggregated just 132 runs from 6 innings thus far, and averages a paltry 22 with the bat. Adding to their existing woes, it has been stated that Shaun Marsh will be unavailable for the game as he is awaiting the birth of his child. And, Rilee Rossouw has been injured as well and is in doubt for the game.

The Adelaide Strikers have experienced mixed fortunes in their last four games, winning two and losing two. In their previous encounter, the Sydney Sixers chased down the target set by the Adelaide side comfortably with 2 overs and 7 wickets to spare. This would be the first meeting between the two sides.

The pitch at the Adelaide Oval can be termed as a ‘mixed bag’. While batsmen can score big once they pass through the initial phase like how Alex Carey showed in the game between the Strikers and Perth Scorchers, the bowlers will also have reasonable purchase on this wicket.

The average first innings score in the two games that have been played so far at the Adelaide Oval is 156.

The chasing side has won one game and lost one game at the Adelaide Oval so far.

Kane Richardson has caused a few problems to the opposition batsmen with the ball in hand. The tall right-arm pacer has scalped 9 wickets in the tournament thus far, and has picked up his wickets at an excellent strike rate of 16.50. If Richardson can hit the right areas in this game, then he can be amongst the wickets again.

In the last game against Sydney Sixers, Rashid Khan was one bowler against whom the batsmen struggled. The Afghan spinner took three wickets, giving away just 18 runs. Rashid is currently the sixth highest wicket taker in the Big Bash League, having scalped 11 wickets thus far.

Also, his strike rate in the 2020-21 edition of the Big Bash League has been 14.7. Rashid Khan’s four overs in this encounter will be extremely important.

The prediction is for Adelaide Strikers to win the match 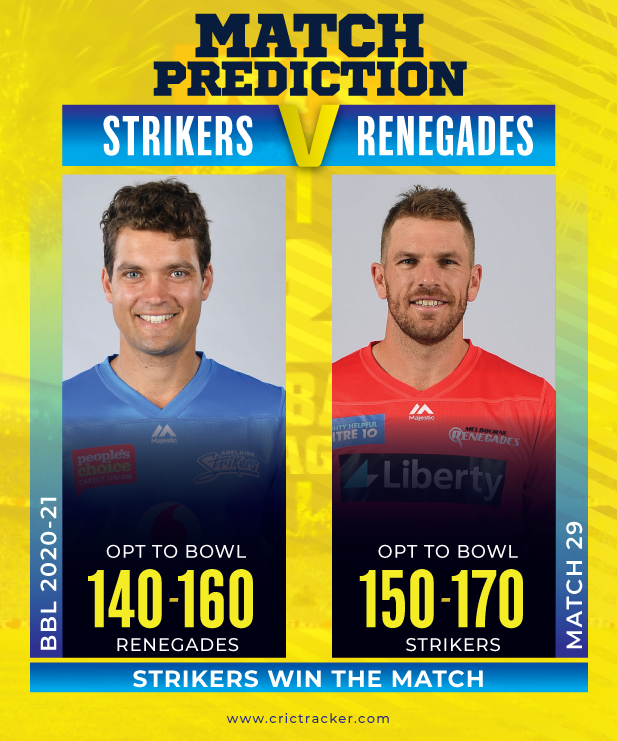