The 37th match of Women’s Big Bash League (WBBL) 2020 will be played between the Adelaide Strikers Women and the Sydney Sixers Women at the Drummoyne Oval Stadium in Sydney.

We are nearing the business end of the league stages of WBBL 2020, and the points table is as congested as ever before. Melbourne Stars have moved miles ahead of everyone, while Melbourne Renegades have fallen back quite a bit. But except them, all 6 teams are breathing down each others’ necks, as the race for the semi-final is intensifying at a great pace.

The two sides who will meet tomorrow at the Drummoyne Oval Stadium are very much in the mix for that race. Sydney Sixers, who once were looking as title-favourites, have lifted their foot from the pedal for a while, but they still are placed in top 4. On the other hand, Adelaide Strikers might be in the 7th place, but a couple of wins is guaranteed to change the complexion of the table. Hence, this game is expected to be a fascinating contest.

We can expect full 40 overs of action, as chances of precipitation are just 10%. The temperature is expected to be around the 27 degree Celsius mark.

The Drummoyne Oval track has been favouring the bowlers, as the batswomen have struggled to get going here. Anything near 140 should be a very competitive total.

113 (Last two matches of the tournament played at this venue)

Adelaide Strikers’ Suzie Bates did not play the previous match due to a shoulder injury. She is likely to miss this match also.

Ellyse Perry has justified her reputation yet again in this tournament. She has scored 263 runs, which is the most by any Sydney Sixers cricketer. Besides that, she has also picked up 4 wickets.

Laura Wolvaardt has done a Perry-esque job for the Strikers, having amassed 240 runs in 9 matches for her side. She has an impressive average of 30.

Sarah Coyte has been one of the most lethal bowlers in this competition, having scalped 11 wickets in 8 matches. She has also maintained a brilliant economy rate of under 7 runs per over.

Stella Campbell has been Sixers’ most impressive bowler. She has picked up 7 wickets for her team, while her economy rate is slightly over 8 runs per over. 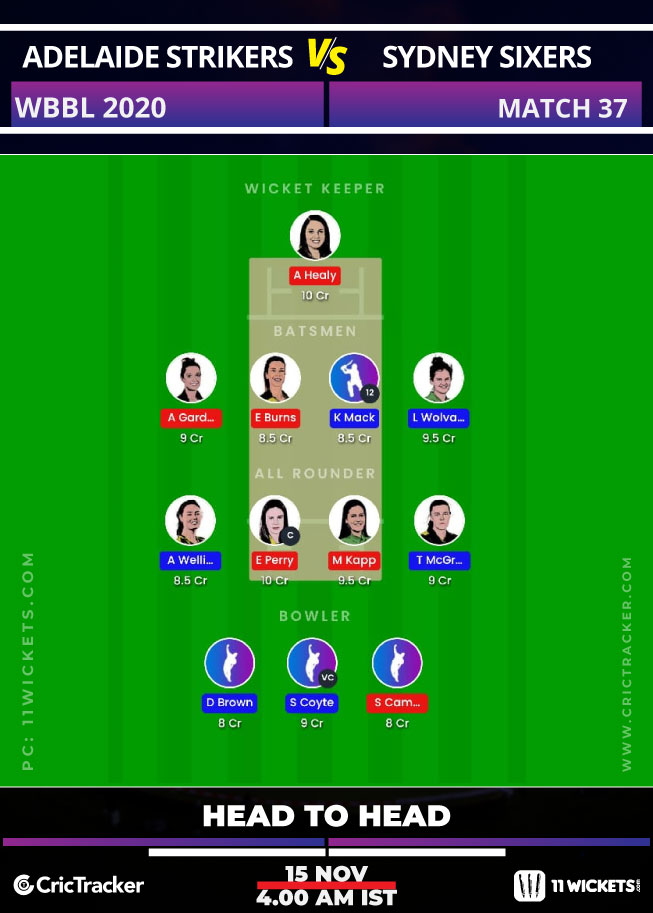 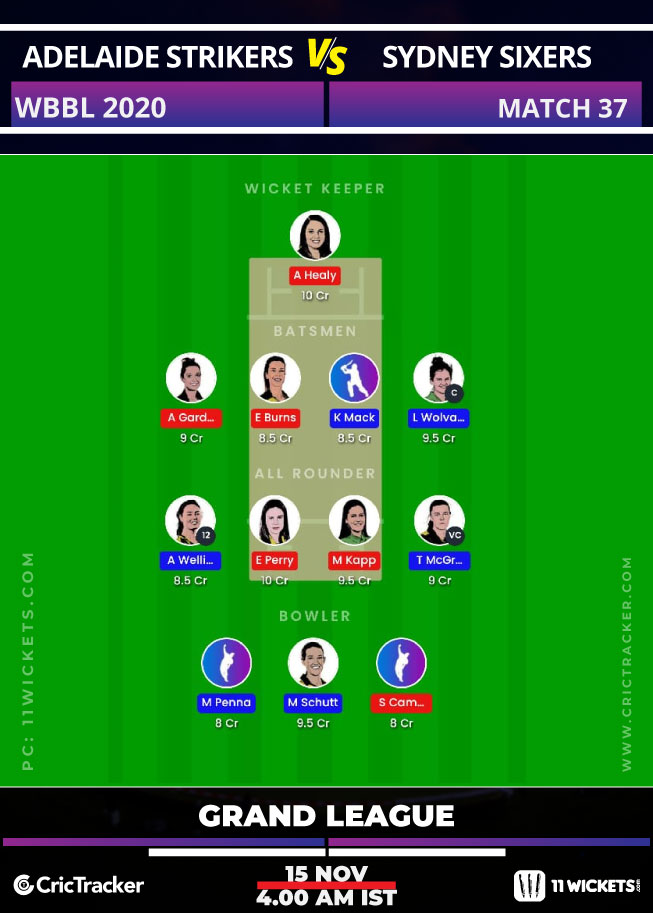 Tahlia McGrath has been phenomenal with both the bat and the ball. She has scored 182 runs and has also picked up 5 wickets. Hence, she can be an effective vice-captaincy pick for any one of your 11Wickets Fantasy teams.

Sydney Sixers Women are predicted to win this game.