Here are some of the records which Alyssa Healy bagged under her belt on Sunday at the Allan Border Field.

Alyssa Healy had an eventful day with both bat and gloves during the 2nd T20I against New Zealand Women. She first effected a stumping to break the 49-run partnership for the 3rd wicket and one more catch down the legs. The two dismissals helped the Aussie to become the most successful T20I keeper by surpassing MS Dhoni. Healy later smashed a quick-fire 33 in only 17 balls to set the platform in Australia’s 129-run chase. The home team went on to win the game by eight wickets and seal the three-match T20I series.

Here are some of the records which Alyssa Healy bagged under her belt on Sunday at the Allan Border Field:

92 – The 92 dismissals by Alyssa Healy are now the most in Twenty20 Internationals going past MS Dhoni’s tally of 91 dismissals. No wicketkeeper other than Healy and Dhoni has affected as many as 75 dismissals in T20Is. 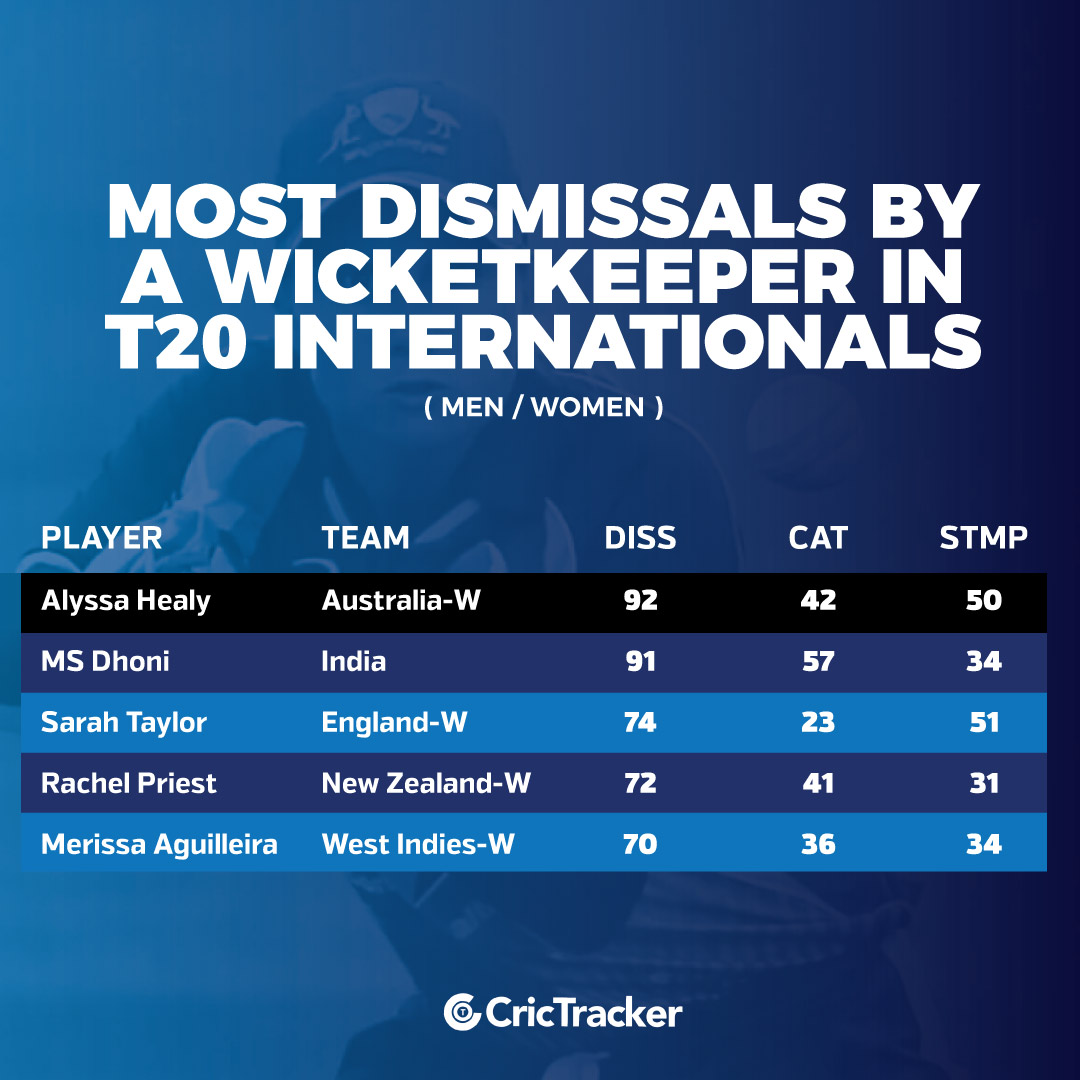 99 – This game was the 114th appearance for Healy in T20I cricket but her 99th as a wicketkeeper. She is now the most capped wicketkeeper in T20I history across Men’s and Women’s cricket going past MS Dhoni’s 98 matches. The former Indian captain featured in all the 98 T20I matches he played as a wicketkeeper only.

50 – The stumping of Amy Satterthwaite was the 50th dismissal for Healy as a wicketkeeper in T20Is. She is only the 2nd wicketkeeper with 50 T20I stumpings after Sarah Taylor (51). The highest in Men’s T20Is is only 34 by MS Dhoni who will be joint 5th highest in the overall list. 50 – The match played on Sunday was Alyssa Healy’s 50th appearance in T20I format on Australian soil. She is now only the 2nd player to feature in 50 home T20Is across Men’s and Women’s cricket. Anisa Mohammed of the West Indies Women also played exactly 50 T20Is in the Caribbean Islands.

42 – Number of catches by Healy as keeper in T20Is; the most in Women’s T20I cricket surpassing Rachel Priest (41). She is 3rd in the overall list standing only behind MS Dhoni (57) and Denesh Ramdin (43).