The upcoming series will bring the 10-month hiatus of cricket for Afghanistan to an end.

Afghanistan will kick start their World Cup Super League campaign through the three-match series against Ireland starting from 21st January 2021 at the Sheikh Zayed Stadium, Abu Dhabi. Having last played an international encounter in March 2020 against the same opposition in a three-match T20I series at Greater Noida, the upcoming series will bring the 10-month hiatus of cricket for Afghanistan to an end.

The pandemic, which has had a fair role to play in the buildup of this series, has forced both the teams to play the series, in its entirety, at the same venue: Abu Dhabi. Earlier scheduled to start on January 18, the delayed arrival of Afghanistan in UAE led to the postponement of the tour.

Incidentally, the UAE government had temporarily suspended visas for nationals of 13 countries, which led the Afghanistan Cricket Board (ACB) to make emergency plans to hold the three-match series in Oman. However, Ireland’s reluctance to play outside UAE jeopardized the tour again. However, the ACB eventually managed the requisite visas to UAE, though not before another delay in the process.

As for the series, there is some interesting talent to look out for on both sides. Afghanistan has named wicketkeeper-batsman Rahmanullah Gurbaz and Azmatullah Omarzai in their 16-man squad, dropping Hazratullah Zaizai and Samiullah Shenwari, whereas Ireland has the likes of Simi Singh, Mark Adair, Andrew McBrine apart from their seasoned campaigners in Paul Stirling, Kevin O’Brien, and Andy Balbirnie.

All eyes will be on Rashid Khan, Mohammad Nabi, and Mujeeb Ur Rahman, who have rejoined national duty after leaving their BBL commitments in the middle. After the entire episode of delays and setbacks, the series promises some riveting action as Ireland, who are coming after a 1-1 draw in the four-match series against UAE, play their second ODI series in the crucial Super League, the precursor for the 2023 World Cup.

Despite the lack of practice of late, Afghanistan can take heart from their 23-run victory over their immediate rivals in the tour game at Abu Dhabi.

The strip at Abu Dhabi, much like most the venues in the desert, is known to assist the spinners, and it was manifest the recently-concluded series between Ireland and UAE. Abu Dhabi, in the 50-over format, is not known for too many high scoring games, and the same is well-established by the fact that only thrice out of the 47 ODIs, has a team crossed 300. Given the 30-17 record in favor of teams batting first, the ideal choice upon winning the toss needs no mention.

Playing combinations for AFG vs IRE

Rashid Khan has bagged 48 wickets against Ireland in 23 ODIs – the most he has against any nation. He is an impact player for any team regardless of the format and given the spin-assisting conditions of Abu Dhabi, expect him to leave a mark in the entire series, let alone the first match. To his favor, he is coming after a brilliant run in the Big Bash League, and his team would want him to fire with both bat and ball.

Stirling has not scored even half as many runs against another ODI-playing nation as he has against Afghanistan. In 26 innings, the former Irish skipper has got 1082 runs at a marvelous average of 43.28, with 10 half-centuries and a century to his name. He is coming after a spectacular 131 off 148 against UAE, and even though it came in a losing cause, Stirling did not put a foot wrong during his knock.

AFG vs IRE Head to Head 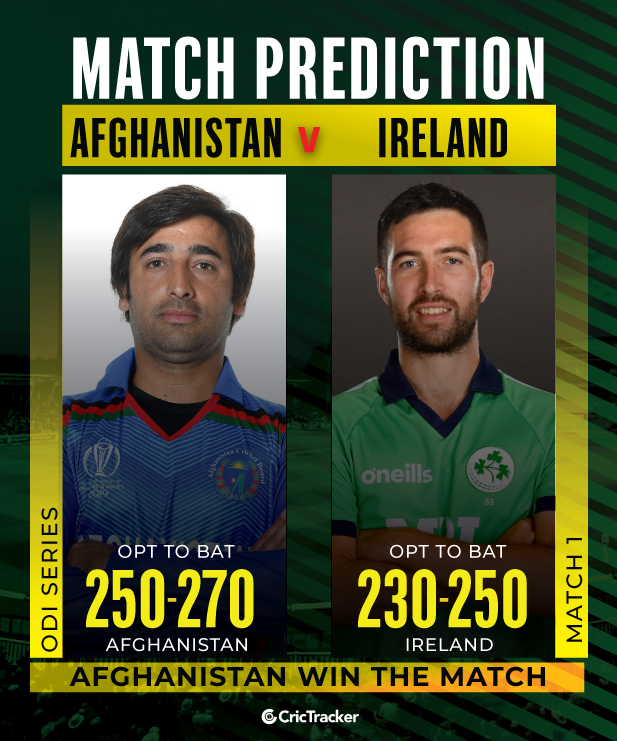