It is advisable to update your team and captain after the toss and pick more batsmen from the team batting first. 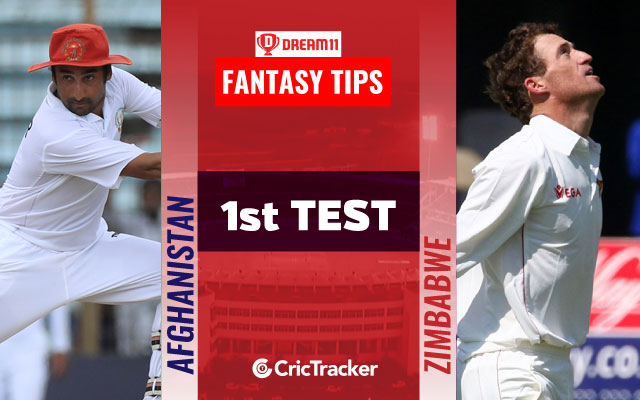 The first Test of the two-match Test series between Afghanistan and Zimbabwe will be played at the Sheikh Zayed Stadium in Abu Dhabi, on 2nd March, Tuesday.

Afghanistan and Zimbabwe return to play international matches as they are up against each other for a two-match Test series in Abu Dhabi. The series will commence on the 2nd of March at the Sheikh Zayed Stadium. Both the teams are coming from a long break in the longest format of the game. This will be the first-ever 2 match Test series for Afghanistan. They have been pretty good in the longest format so far. However, this squad is a bit inexperienced one as there are a few new faces.

On the other side, Zimbabwe also has only been playing white-ball cricket since the restart of cricket. They haven’t won a single series in 10 years. But this is a new-look side, who under Sean Williams, have played impressive cricket. Young batting sensation Wesely Madhevere, who stunned Pakistan recently, is expected to make his debut. This series is very important for Zimbabwe cricket as it might prove to be the revival of their cricket which hasn’t quite hit off in the international arena for some years now.

The weather forecast suggests a sunny day in Abu Dhabi for the next five days in the Test match. The temperature will rise from 24 to 29 degree Celsius at the end of the day with no chance of precipitation.

It was 2018 when a test match was last played at this venue. The condition of the pitch is unknown but it is expected to be a good one to bat on. Only one match has been won by batting last at this venue in the last 10 years. The team winning the toss should bat first to get the most from the first two days with the bat.

Rashid Khan suffered a finger injury during his time in PSL, ruling him out of this game.

Kevin Kasuza and Munir Ahmed scored centuries in the warm-up game for their respective teams. Both of them are top-order players and will enjoy the batting conditions in the first two days. Munir Ahmed was the second-highest run-scorer in the Ahmad Shah Abdali 4-Day tournament. He scored 809 runs in 9 games at an average of 53.93. On the other side, Kevin Kasuza scored 71 runs in the only game he played in Logan Cup 2020/21. He has scored 3 half-centuries in his last 5 appearances.

Sean Williams has been in pretty good form recently. He scored an impressive 86 in the warm-up game and was unfortunate to get run-out.

Asghar Afghan scored a half-century in the warm-up game recently. He is the second-highest run-scorer in the history of Afghanistan’s Test cricket, with 249 runs to his name.

Yamin Ahmadzai is second to Rashid Khan in that list. He has picked up 10 wickets in 4 games and has an average of just over 21.

Brandon Mavuta took a total of 26 wickets in 7 games he played in the last two seasons of the Logan Cup. In this season, he picked up 6 wickets in just 2 games.

Zia-ur-Rehman Akbar was the second-highest wicket-taker in Afghanistan’s domestic first-class tournament. He took 35 wickets at an average of 14.42.