Afghanistan won 5 out of the last 6 T20Is they played against Ireland while one game was abandoned.

Beginning from February 21, Afghanistan will take Ireland on for a full-fledged series in India. Three T20Is, five ODIs and one Test will be played in the series which will be flagged off with the shortest format first. The Asian side will be playing international cricket after a gap of five months.

The last time they were on the field, a spirited effort helped them tie the game against India in the Asia Cup 2018. Since they qualified for the World Cup 2019, this entire series will be a vital one for Afghanistan. They will be looking to get back into the groove and play some competitive cricket. Though this is the shortest format, the hosts will be hoping to build a team for the mega event.

The visitors though haven’t got as much pressure on them. They aren’t a part of the quadrennial tournament and are expected to play some highly competitive cricket. All the games in this series will be played at Afghanistan’s adopted home ground, the Rajiv Gandhi International Cricket Stadium in Dehradun, India.

Located in the capital of Uttarakhand, the RGICS is one of the newest cricket stadiums in India. Just three T20Is have been played at this venue previously, all of which were won by Afghanistan. The team understands the conditions well and could play accordingly.

The pitch has got a lot on offer for the bowlers and a total of 42 wickets are picked in the three games thus far. The temperatures will be quite cold and it will be cloudy during the game. Although there is a slight chance of precipitation, it might not interrupt the game.

Afghanistan will enter into this series in the absence of the veteran cricketer Mohammad Shahzad. It could be Usman Ghani who will open the innings with Hazratullah Zazai. The middle-order has got some experienced players like Asghar Afghan and Mohammad Nabi who will have to shoulder a great deal of responsibility. Rashid Khan will share the spin bowling duties along with Mujeeb Ur Rahman while Sayed Shirzad and Farid Malik are the pacers.

For Ireland, skipper Paul Stirling will open the innings with Kevin O’Brien. The middle-order comprises of some quality players like Andrew Balbirnie, Stuart Thompson, Shane Getkate and Stuart Poynter. However, most of them do not have enough experience of playing in the subcontinent which would be a major issue. The bowling unit has been doing well in recent times and Simi Singh could play an important role.

Afghanistan is expected to draw first blood in the three-match series. 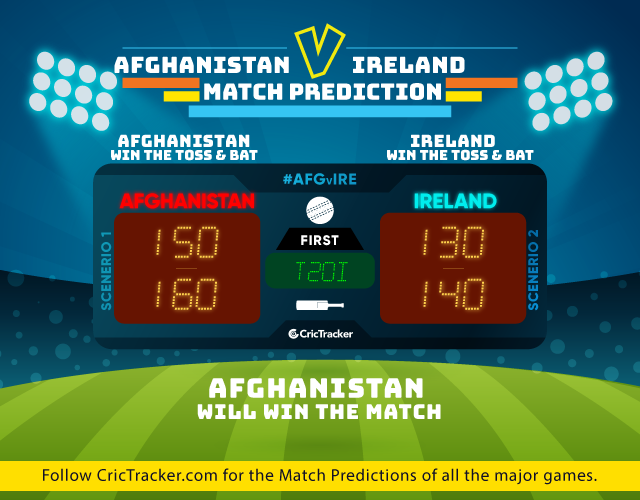