Can Rashid Khan and Co hit back and stay alive in the series?

At one point of their innings in the first ODI, Afghanistan would’ve felt that they have got West Indies by the scruff of their neck. However, they couldn’t hold on to their momentum and the visitors crawled back into the contest at the Bharat Ratna Shri Atal Bihari Vajpayee Ekana Stadium in Lucknow. In the end, the Caribbean team won by seven wickets to take a 1-0 lead in the series.

It wasn’t a high-scoring match, but even the Kieron Pollard-led unit had to fight hard in order to chase down 195 as it took them 46.3 overs. The second game of the series is a must-win affair for the Afghans and it is scheduled to take place on November 9. On the other hand, the West Indies are going through a transition phase with a new skipper and they would be happy with their start.

The pitch in the first game wasn’t an absolute belter, but runs were on offer if the batters put their heads down. The spinners were effective and slowed things down. Dew is likely to play a significant role and the tweakers may not get a whole lot of assistance under the lights. Batting second should be the way forward. The temperature will be in between the 22- and 28-degrees Celsius mark.

The hosts’ opening stand is a bit of a concern as both Zazai and Ahmadi failed in the practice match and the first ODI as well. The duo can tear any bowling apart though on their day. Rahmat Shah notched his fourth successive fifty versus the West Indies and he can’t afford to drop his guard. Ikram Ali Khil also got back-to-back fifties against the Caribbean side and his role will be crucial.

It was Ikram’s brain-fade moment that led to a batting collapse. In a hurry to congratulate Shah, he got himself run out. After the dismissal, the home team could only add 68 runs 18.5 overs, losing seven more wickets. Mujeeb troubled the batters, but later, dew neutralized his efforts. He got rid of Evin Lewis and Roston Chase. Rashid Khan and Mohammad Nabi couldn’t make a breakthrough.

The visiting team will like to work a wee bit on their bowling. After picking the early wickets of Ahmadi and Zazai, they allowed the Afghans to make a comeback. The West Indies looked at bay when Shah and Khil stitched together a partnership of 111 runs for the third wicket. Jason Holder was tough to get away as he gave away only 21 runs, tying the batsmen down with his accuracy.

Alzarri Joseph was rusty and leaked 42 runs in five overs without any success. Roston Chase was their biggest positive. He picked up two wickets, conceding 31 runs and then turned up with 94 in a stand of 163 runs with Shai Hope. The latter opened the batting and scored 77 off 133 with five fours. It’s now time for Lewis and an under-fire Shimron Hetmyer to contribute with the willow. 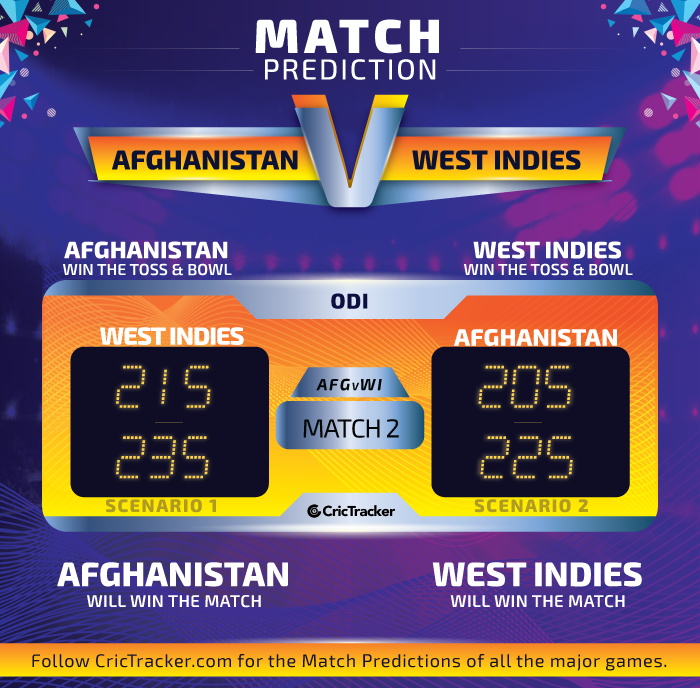