Both sides are coming into the final with a thumping win in the semis, which puts either on level terms as far as the odds are concerned.

One of the biggest games in Afghan cricket history will take place on Sunday as we will be having the first ever Afghanistan Premier League winners. The Balkh Legends will be colliding against the Kabul Zwanan in a battle of supremacy and it is fitting that the two best sides thus far have reached the final.

The last time they met, runs galore and history was re-written. Whilst Nabi’s Balkh registered the highest ever T20 score in UAE by any team, Hazratullah Zazai smashed six sixes in an over and also equalled Chris Gayle and Yuvraj Singh for the fastest T20 fifty of all time.

Once again, these two sides are going to provide a mouth-watering battle at Sharjah and the fans will come in big numbers to witness some of the biggest T20 stars battle it out for glory. Both sides are coming into the final with a thumping win in the semis, which puts either on level terms as far as the odds are concerned.

Another flat deck is expected for the final encounter. Both sides made merry of the good hard tracks by batting first in the semifinals, but now they should be ready for any challenge. The weather will remain scorchingly humid and hot in Sharjah and the pitch is expected to remain on the drier side.

Chris Gayle and Darwish Rasooli will open the innings as Mohammad Nabi might not be willing to change anything from the previous game. Colin Munro, Ryan ten Doeschate, Ravi Bopara and Mohammad Nabi will have one final job to do in the middle order. Qais Ahmad, Gulbadin Naib, Mirwais Ashraf and Aftab Alam will be assisting skipper Nabi in the bowling attack.

The destructive combination of Luke Ronchi and Hazratullah Zazai will open the innings with the Proteas Wayne Parnell coming in at three. Colin Ingram, Javed Ahmadi and Laurie Evans provide enough solidity in the middle order for Zwanan. Skipper Rashid Khan will have a lot to do with the bat and ball and will be assisted by Muslim Musa, Fareed Ahmad and Fitraullah Khawari in the bowling unit.

The prediction is for Balkh Legends to win the inaugural APL edition in a closely-fought encounter. 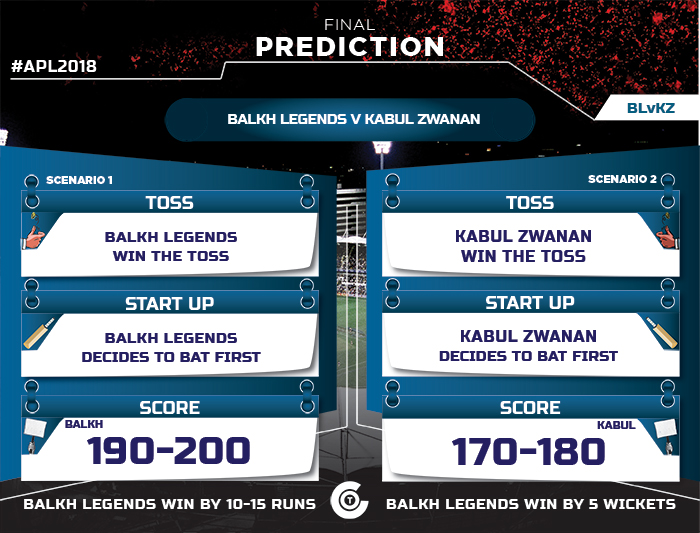