Asghar Afghan will hope for a better show from his troops.

The second match on the doubleheader day in the Afghanistan Premier League (APL) on Sunday will be between Kandahar Knights and Balkh Legends. The latter side lost their first game against Nangarhar Leopards and they will be itching to make amends in this encounter. The Legends, however, will have to make sure they start their tournament on a good note before facing the Knights.

Asghar Afghan will be disappointed with his team as their shambolic fielding let them down in the previous game while defending the meagre total of 140. Even their batsmen should’ve done much better after starting decently well in the powerplay. Karim Janat was their best batter and everyone should take a leaf out of his book to put up a good total on the board.

Mohammad Nabi, on the other hand, is a smart cricketer and will be keen to lead after a long time. He was at the helm for Afghanistan during their rise and his skills will be once again tested. Though Chris Gayle’s absence will most likely hurt the Legends and some other batsman will have to make up for him at the top of the order.

Despite a poor show, Kandahar Knights are unlikely to make any changes to the team. The XI players who stepped out on the field should only concentrate on putting their best forward and good times will start for them. Paul Stirling and Brendon McCullum have to carry on for some more overs after getting a start to make things easy for the ‘Afghan’ middle-order. Their bowling looks fairly settled and have good enough variations up their sleeve.

They will have to play back to back matches and the heat in the UAE is likely to take a lot out of them. Though a lot of changes aren’t expected in the team which is currently playing the encounter. Chris Gayle will fly on the game day and is unlikely to play this game as well. However, the team management will be confident of their available troops to make a difference by putting up a stunning show.

The prediction if for the Balkh Legends to hand over the second consecutive loss to the Knights. 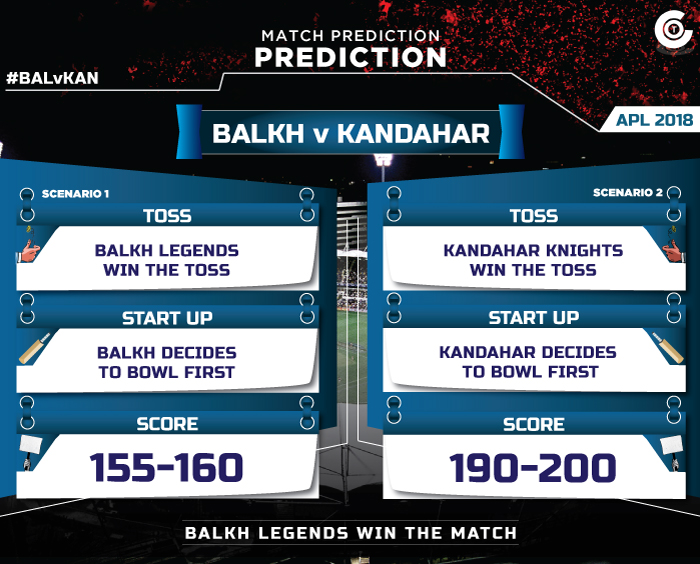