India would remember how Steve Smith tormented them at the SCG in the ODIs.

India had their fair share of troubles during the first T20I against Australia, but they somehow managed to win by 11 runs and took a 1-0 lead in the three-match series. Ravindra Jadeja has been ruled out due to concussion, but Yuzvendra Chahal’s bowling has given them a lifeline.

Going into the second T20I at the SCG on Sunday, the Men in Blue have to resurrect their batting as well. The fact that India are on a nine-match winning streak in the format should also give them confidence.

For Australia, Nathan Lyon has been added to the squad in place of Cameron Green. Skipper Aaron Finch’s niggle will also give the Aussies a bit of headache. The hosts will also be mindful of the fact that they have lost both their T20Is against India at the venue in Sydney.

The pitch in Sydney was a belter for batting in the ODIs where all four times, scores of over 300 were registered. Going by history in the T20 format, the venue has been a witness to some fairly high-scoring affairs with the average first innings score over 160.

The chasing teams have had a fair amount of advantage. The conditions will be sunny with the temperature around 30 degrees Celsius.

Steve Smith would remember how he pulverised the Indian bowling attack in the ODI series. At the SCG, he smacked back-to-back centuries, guiding the Aussies to an unassailable 2-0 lead.

In the first T20I, he started with a massive six on the on-side, but then perished to Yuzvendra Chahal. It was after his dismissal that the momentum went in India’s favour. He would be keen to make amends.

Virat Kohli doesn’t have a T20 ton to his name, but with as many as 24 half-centuries, he has an average in excess of 50. But in the last game, he got out after giving a simple caught and bowled to Mitchell Swepson.

He was found wanting to a delivery that skidded a bit more than Kohli expected. At the SCG against the Aussies, the 32-year-old Virat has had scores of 50 and an unbeaten 61. 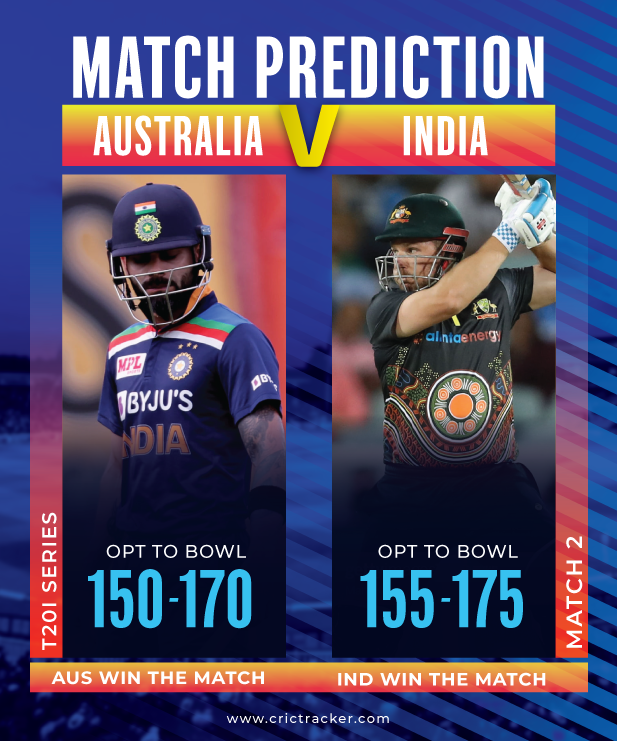