India have beaten Australia in all their three T20Is at the SCG.

After losing the ODIs 1-2, Team India, well and truly, have made amends, taking an unassailable 2-0 lead in the three-match T20I series. Chasing 195 in the second game, the Men in Blue found themselves in a bit of trouble, but Hardik Pandya’s six-hitting prowess at the death took them over the line.

It was also India’s third victory over the Aussies in as many T20I games at the iconic Sydney Cricket Ground. The third match is scheduled to be played on Tuesday, December 8 and India would be hoping for a whitewash.

The Men in Blue can be proud of the fact that their newcomers have stepped in with Jasprit Bumrah not playing a single T20I thus far. For the Aussies, all they would be hoping is to salvage some pride and maybe, avoid a series whitewash in home conditions.

The pitch at the SCG was an excellent one for batting, though going by history, it has something for the bowlers as well. The track isn’t expected to change much even in the last game and bowlers may again find it tough to keep the batters in check.

Teams should opt to chase since 195 was tracked down the other day. The temperature will be around 21 degrees with the humidity in the 40s.

Matthew Wade has played a number of substantial knocks for the Hobart Hurricanes in the Big Bash League. The southpaw brought forth all the experience when he opened the batting on Sunday.

He notched a half-century off 25 balls after which he got run out at the striker’s end in a rather bizarre manner. On Tuesday, in the dead-rubber, Wade would again look to make an impact.

T Natarajan has been exceptional with the ball in hand. In both the T20Is where bowlers have gone for runs, the speedster has managed to pick up five wickets, conceding only 50 runs in his eight overs.

He has churned out Yorkers without much fuss and restricted the batters from taking him on. Having already taken seven wickets on the tour, the 29-year-old has the potential to end with another decent spell. 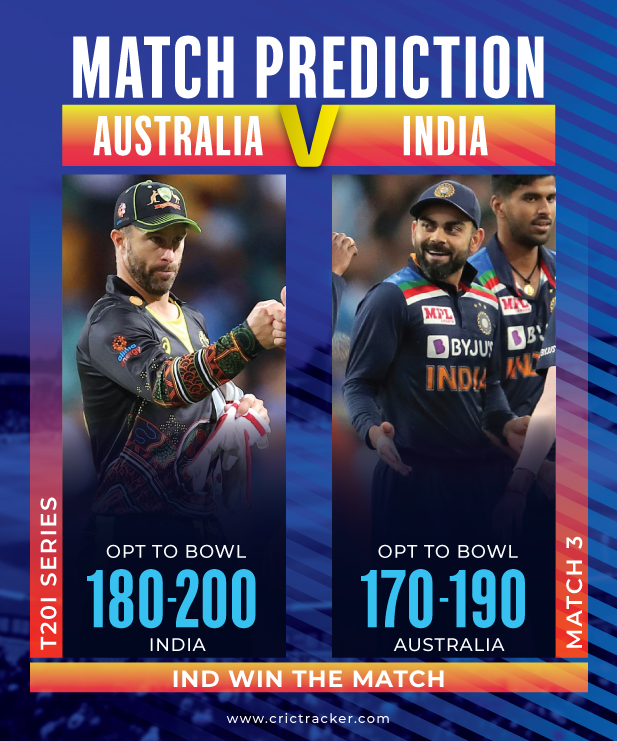