The 1st game of the 3-match One-Day series between Australia A Women and India A Women will be played at the Allan Border Field in Brisbane.

India A Women’s tour of Australia starts on Thursday where they play the Australia A Women in the first of the 3-match One-Day series which will be followed by a 3-match T20 series. India A Women players are in solid form having won everything they played in Bangladesh and Sri Lanka tours earlier this year. Veda Krishnamurthy, who had decent returns in the West Indies T20Is, will be leading the team.

Priya Punia and Shafali Verma are notable inclusions at the top. The home team have announced a strong squad which contains contenders for World Cup squad. The likes of Tahlia McGrath and Heather Graham are coming off good performances in the WBBL. Erin Burns and Bridget Patterson are also part of this squad.

Scattered thunderstorms and showers are expected at the Allan Border Field at regular intervals on Friday.

The Allan Border Field is a decent venue for batting when it comes to Women’s One-Day matches. During the recent Women’s ODI series between Australia and Sri Lanka, the hosts posted 280+ twice where they batted first. Sri Lanka batted first in the last game and got close to 200 with their skipper scoring a hundred.

Devika Vaidya has done a good job as an all-rounder with the ball and also a top-order batter. Tanushree Sarkar has been consistent in the recent ‘A’ team tours with her wicket-taking ability and can also contribute with the bat. Tahlia McGrath was in great form with both bat and ball during the recent WBBL. She will be hoping to continue those efforts. Bridget Patterson played a couple of big knocks during the first half of the WNCL played before the WBBL. 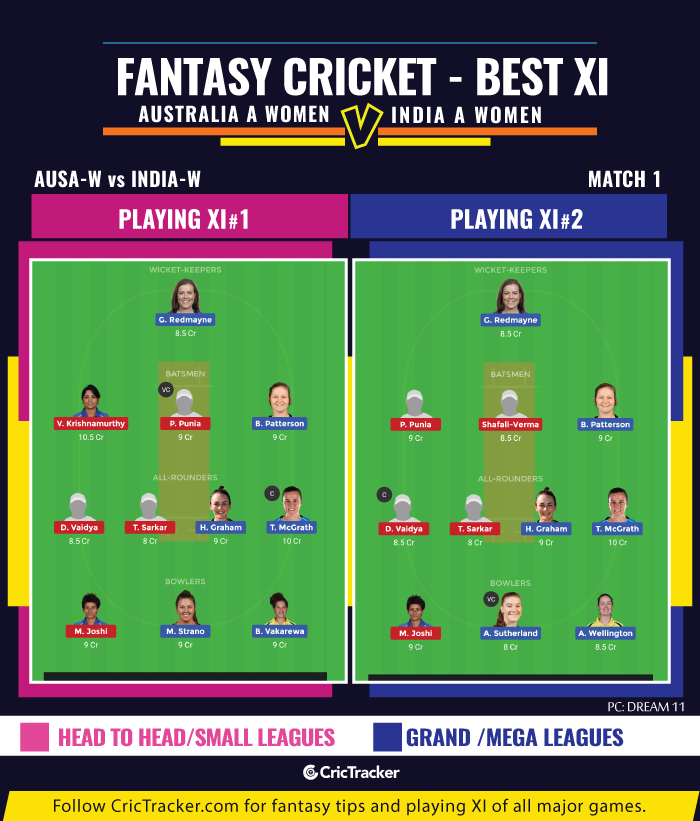 We are not certain whether the team management shows preference to the senior players or the younger sensations. At the same time, there is a possibility of more than 11 players getting to feature in the match from a team.

Australia A Women are expected to take a 1-0 lead in this series.