Team India is expected to clinch the ODI series with yet another comfortable victory over the hosts Australia.

Australia aims their first ODI series win as they will go up against India in the series-decider of the 3-match ODI series in Melbourne on Friday. The Aussies have not won an ODI series/tournament since defeating Pakistan at the start of 2017. In fact, the Australians managed to win as few as four ODIs in this span. A lot of work has to be done by the ODI Cricket World Cup holders to defeat India.

In both the games, India has managed to ease the chase during the middle overs. The lack of wicket-taking options cost the hosts in the second game as they couldn’t run through the formidable top-order of the opposition like at the SCG. Middle-order contributing is a positive sign for India who has gained a bad reputation of “top three or nothing” in the shorter formats recently.

The third and final game of the ODI series between Australia and India will be hosted by the Melbourne Cricket Ground.

The MCG has been on the slower side recently but is good enough to produce scores of 300 if the batsmen are good enough in rotating strike in the large boundaries of MCG. Chasing will be a perfect option at this venue given the fact the batting first sides end up making below par score trying to clear the big boundaries.

The one-year ban on David Warner and Steve Smith brought back Shaun Marsh into the Australian ODI setup. The senior batsman adjusted to the new role of batting at No.3 and No.4 where he has to anchor the innings. In nine ODIs Shaun played since last year, he scored four centuries but sadly all those went in losing cause. In the other five innings, he has three scores of the 20s, one single digit score and a fifty during the SCG ODI. Marsh will be once again crucial for Australia’s winning chances in this series decider.

In the last two ODIs, we have stressed on Rohit and Kohli to be picked up as captain based on their record at respective venues. Rohit was MVP in the first ODI while Kohli was the 2nd best in the Adelaide ODI as Shaun Marsh scored more than the Indian skipper. In the same trend, making Rohit or Shikhar Dhawan as captain will be perfect given the duo’s record at the MCG.

It is not that Kohli hasn’t done well at this venue, but the openers have outperformed their skipper in the past. Rohit has two scores of 130+ from four matches as an opener at this venue while Dhawan scored a 130+ and scored a fifty in the same matches. They do have a slightly better record in series-deciders than Kohli but hardly both have performed together.

Dhawan averages 72 while Rohit has an average of 60 in the bilateral ODI series deciders. Rohit has a better record while batting first while Dhawan excels in chases in those matches. Virat Kohli, however, can be considered as he is known for producing his best when the team needs like he did in the last game. Shaun Marsh and Marcus Stoinis make up as good alternatives for captain and vice-captain roles. 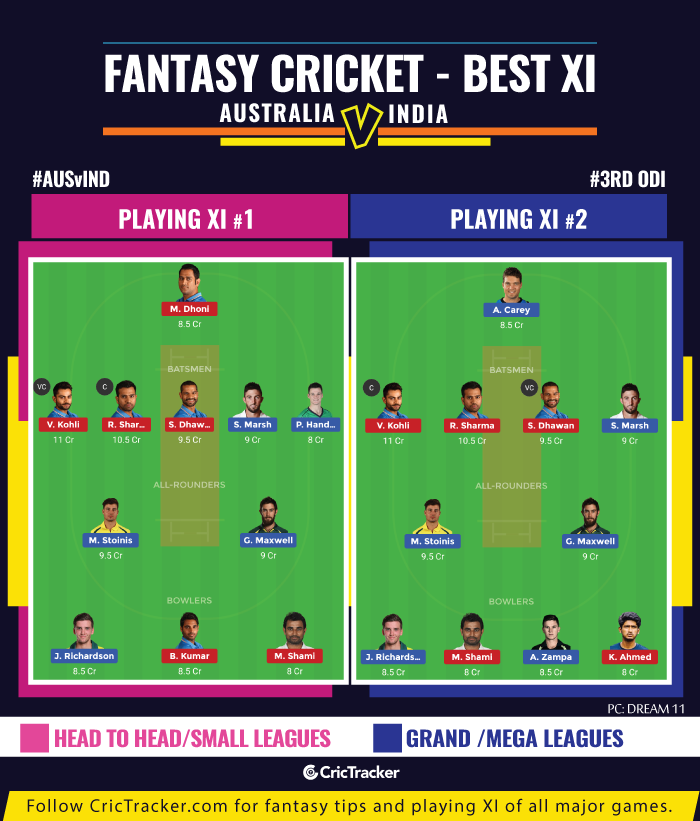 Kuldeep Yadav could not be fitted in both the suggested playing XI due to the highest prices of Kohli, Rohit, Dhawan, Maxwell, Marsh and Stoinis – The main core in this series’ fantasy XI. The six players collectively eat up 58.5 credits. As a result, no other players with nine credits can be picked.

Once again it will be tough to predict India’s playing XI especially due to the bowling options. India could be seen bringing Vijay Shankar and Yuzvendra Chahal due to the long boundaries for Jadeja and Siraj. There are chances of them replacing Ambati Rayudu with Kedar Jadhav as well.

Team India is expected to clinch the ODI series with yet another comfortable victory over the hosts Australia.