Marnus Labuschagne scored a magnificent knock of 153 runs in the first inning of the series opener followed by his fifty in the next innings.

The 2nd Test of the three-match series between Australia and New Zealand will be played at the Melbourne Cricket Ground in Melbourne. The match starts at 11:00 AM local time (12:00 AM GMT) (5:30 AM IST). This match can be watched live on Sony Six and Sony Six HD. Live streaming will be available on Sony LIV.

After convincingly winning the Test series opener against New Zealand, Australia would be eager to finish their year on a high note by sealing the Boxing Day Test. Their batting looks quite strong with the likes of David Warner, Steve Smith and Marnus Labuschagne, who are in top-notch form with the bat.

Furthermore, there is no doubt about their fast bowling attack that comprises of Mitchell Starc, Pat Cummins and Nathan Lyon. Australia have suffered a blow as Hazelwood has been ruled out from the series after getting injured in the series opener. It would be interesting to watch on which bowler between James Pattinson and Peter Siddle will get into the playing XI.

On the other hand, New Zealand will look to revive their chances of winning the series. They have the experience of Ross Taylor, Kane Williamson, Tom Latham, who is in good form with the bat. While in bowling Neil Wagner has done really well with the new ball alongside Tim Southee. Moreover, in the Boxing Day Test Trent Boult is also expected to get into the team after recovering from his injury. Overall, it is expected to be a nail-biting Test for the fans.

There are no chances of rain on all the five days of the match. However, the temperature is expected to deviate between 14 and 24 Degree Celsius according to Accuweather.

The track at Melbourne Cricket Ground is expected to go in favour of the batsmen with bowlers getting a genuine bounce from the drop-in wicket that is used on this ground. However, generally, the spinners do not get much of purchase at the MCG. The team winning the toss will look to bat first as far as trends are concerned at this venue.

Average first innings score: 310 (In 111 Tests played at the venue)

Trent Boult will be monitored at training before taking the final decision.

Lockie Ferguson has been ruled from the Test series and will not feature in the crucial game.

Marnus Labuschagne is in red-hot form in the longer format for Australia. He scored a magnificent knock of 153 runs in the first inning of the series opener followed by his fifty in the next innings. He would be a safe pick for any Fantasy Side. Steve Smith, the No.2 batsman in Test cannot be neglected while picking Dream11 Fantasy Side. Neil Wagner and Kane Williamson will also be important players to watch out in the Boxing Day Test. 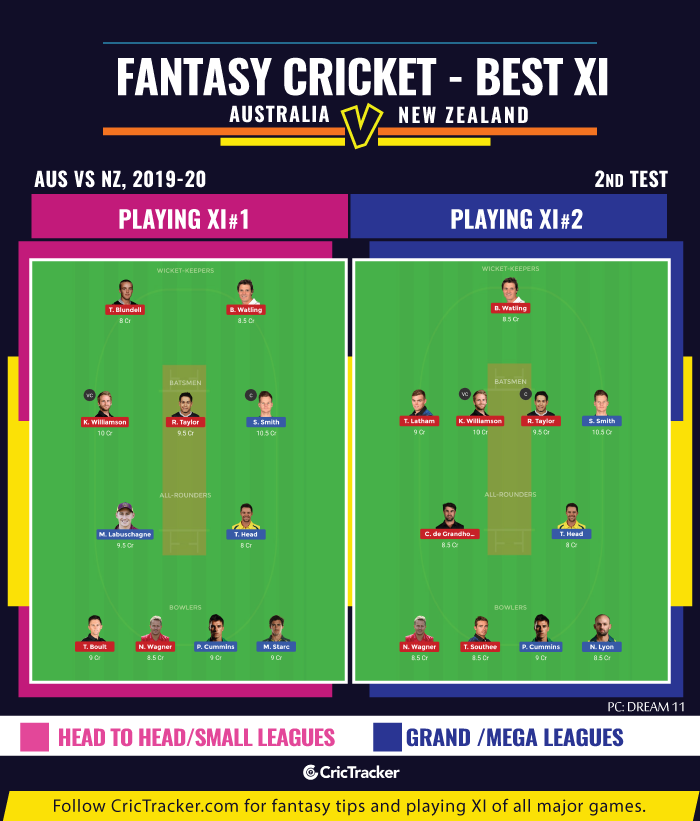 Mathew Wade, the wicketkeeper-batsman has not been able to deliver with the bat so far for Australia. However, he is a good hitter of the ball and will look to click a good knock in the upcoming match. Looking forward to Wade’s form, he could be a risky pick but will be worth for any Grand League Side.

Australia is expected to win this game.