Australia and Pakistan have had completely contrasting fortunes in recent times. The latter, being the ICC’s number-one ranked T20I team, lost to Sri Lanka 3-0 at the Gaddafi Stadium in Lahore. After the dismal show, Sarfaraz Ahmed was sacked as the skipper and also dropped from the team. The defeat came as a shocker as quite a few of Lanka’s key players were missing as they backed out.

The Aussies, on the contrary, clobbered Sri Lanka itself at home by a margin of 3-0. All the three games turned out to be one-sided affairs. Australia and Pakistan are now set to cross swords in a T20I series, starting November 3 at the Sydney Cricket Ground. At the very venue, Australia have won four matches out of 6 and both their defeats came versus India in 2016 and 2018 respectively.

The average score in T20Is at the SCG is 169 and hence, the game promises to be a high-scoring affair. Moreover, four out of the six matches were won, batting second. The last time a team won, batting first was a decade ago in 2009. There are chances of rain from 2 PM to 4 PM and it means that the game could be delayed. The conditions will be cloudy with the temperature around 23 degrees.

The Aussies are likely to persist with their eleven from the third match versus Lanka. David Warner remained unbeaten in that series, having scored 217 runs. His opening partner Aaron Finch got a golden duck, but got a couple of decent knocks, including a fifty, under his belt. Steve Smith looked in fine form after his half-century at the MCG. McDermott and Turner can also hit the lusty blows.

Not to underestimate the utility Alex Carey brings lower down the order. Their bowling was up to the mark in the last series. Adam Zampa and Ashton Agar were hard to get away. Pat Cummins and Mitchell Starc were amongst the wickets as well. Cummins was the leading wicket-taker with 6 scalps. Kane Richardson didn’t get wickets in the first two matches, but got a couple in Melbourne.

As far as the team combination is concerned, yet again, the onus will be on Babar Azam to anchor the whole innings. Fakhar and Haris are the two other experienced batter. Iftikhar Ahmed promised against Lanka and he needs to carry his form. Mohammad Rizwan had a few decent outings versus the Aussies, though in ODIs, earlier this year, and he will wish to replicate the same.

In the bowling department, Mohammad Irfan was economical in the warm-ups. The spin-attack will be shouldered by Shadab and Imad. Amir and Wahab’s pace will be important as well. Wahab leaked runs at times in his last series and he will have to be a bit more consistent. The 24-year-old left-handed Khushdil Shah may have to wait in order to get his maiden international cap. 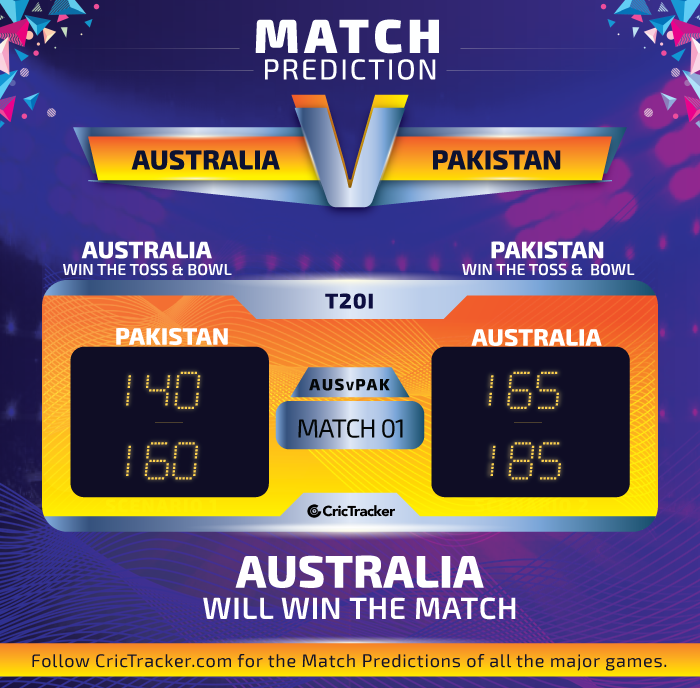