Pakistan side expected to bat twice in all likelihood and Aussie bowlers are crucial for this game with the likes of Pat Cummins and Mitchell Starc expected to serve the Dream11 contest well.

The 2nd Test of the two-match series between Australia and Pakistan will be played at the Adelaide Oval in Adelaide.

Australia and Pakistan face off in the second and final Test at the Adelaide Oval with valuable points on offer as part of the ICC World Test Championship. The first Test didn’t go according to plan for the tourists as they succumbed to an innings defeat. Although the likes of Babar Azam and Naseem Shah did impress with bat and ball respectively, Pakistan wasn’t able to cope against Australia’s pace attack.

As is the case in each summer, Adelaide hosts the iconic Pink Ball Test this time around as well. While this wasn’t the case in 2018, Australia will be eager to make light work of the Pakistan batting unit although they have prior experience with the iconic Pink Ball. Nevertheless, Australia will fancy its chances to win this game as well while a new-look Pakistan looks to make an impact at the expense of the mighty Aussies.

The forecast isn’t great for the first three days with persistent rains on the cards. The temperature will hover around 15 to 20 degrees celsius during the course of the game with a few clouds also expected to make an appearance.

The Adelaide pitch does provide some pace and swing for the pacers with the pink ball also helping their cause. The last Day/Night Test played at this venue saw relatively high scores in the first scores although the pacers did get their way in the second half. Batsmen should be able to play strokes freely after biding their time initially. Teams will opt to bowl first on this surface with either side looking to make good use of the overlying conditions.

Although Steve Smith did get out cheaply in the first Test, his record in 2019 is sensational. With 778 runs in five games, Steve Smith leads the run-scorer charts in the Test format. His performances in previous pink ball Tests is also noteworthy heading into this game.

Similarly, Pat Cummins is the world’s number one Test bowlers and has consistently picked with wickets after the new ball spell. He is nearing 50 wickets for the year as he boasts of an average of 18.92. Babar Azam is slowly finding his feet in Test format. Although his Test average reads 36.22, his superlative hundred in the second innings in Brisbane holds him in good stead. 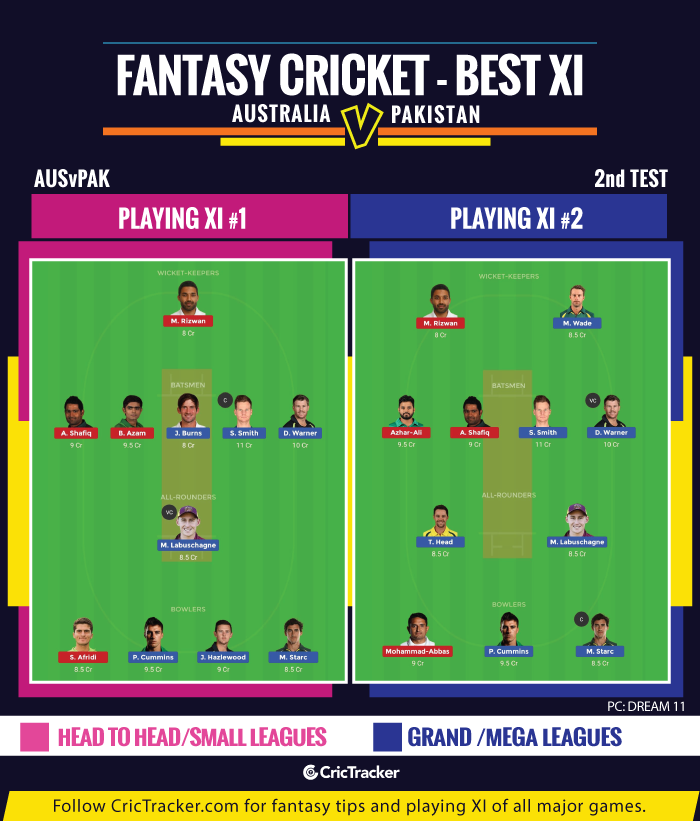 Pacers are expected to pick the bulk of the wickets in this Test which is why three or more pacers are being preferred in the fantasy team. Josh Hazlewood has an impeccable record at this venue, which makes him a worth-while punt for this game.

With Pakistan side expected to bat twice in all likelihood, Aussie bowlers are crucial for this game with the likes of Pat Cummins and Mitchell Starc expected to serve the Dream11 contest well.

Australia is favourites to win this game