Australia vs Pakistan 2nd T20I - Match Prediction: Who will win the match Australia or Pakistan?

Australia vs Pakistan 2nd T20I – Match Prediction: Who will win the match Australia or Pakistan?

Pakistan beat Zimbabwe quite comfortably in the 1st match of the series.

T20 is a game of momentum. Pakistan are coming into this game with plenty of it while Australia… not so much. In the opening game of the Zimbabwe T20 tri-series, Pakistan proved to be a much better team in all the three departments of the game. Of course, there is some difference between Zimbabwe and Australia, the home team is without their batting mainstays and looks pretty weak.

Australia will be led by the dashing Aaron Finch. Now he isn’t Tim Paine and none of these teams are England. However, things won’t turn around overnight and Pakistan sit at the top of the T20I team rankings for some reason. This series will give the Aussies enough time to figure out the kind of line-up they should play, in the current scenario and with the resources they have in hand.

The pitch at the Harare Sports Club is certainly a good batting wicket. The weather in Zimbabwe is pleasant and both the spinners and pacers can get occasional hint of assistance depending on the conditions. Like Pakistan did in the first match, bat first post a good total and get the opposition under pressure.

Pakistan don’t really have a lot of thinking to do. The team did really well in the batting as well as bowling departments, thus there is no need to change the combination. Mohammad Hafeez couldn’t contribute with the bat but then bowled just 5 balls and got his team a couple of wickets. A lot of eyes were on Fakhar Zaman and how he delivers, his 61 was certainly noteworthy.

In the bowling department, they went in without Mohammad Amir and one gets a feeling that the team didn’t miss him. Mohammad Nawaz and Usman Khan bowled really well bagging two wickets each and their economy was in the range of 2.75 and 3.75 respectively which is remarkable in this form of the game. Hasan Ali and Faheem Ashraf might want to do better when they turn up tomorrow.

The first task at hand for skipper Finch will be to regroup his unit after what they suffered in England. They do have the firepower in the unit to beat Pakistan but it is a matter of will they more than can they. Finch will open the batting and there are some talented batsmen in the unit, they should persist with D’Arcy Short and give him enough opportunities to click or fail and drop out. Travis Head needs to capitalize on his form, he is batting really well but needs to make it big.

In the bowling department Billy Stanlake is the name to watch out for, he will trouble the batsmen even on a wicket that has little life. Andrew Tye has to get back into his grove and regain his bowling form, that in itself can make a winning difference for Australia. In Stoinis they have a useful allrounder but like everyone else, he has to make it happen. The other guys should try and make the best contribution to the team’s cause if they are to beat Pakistan.

The Prediction is for Pakistan to win the match after a good contest and ensure their place in the final. 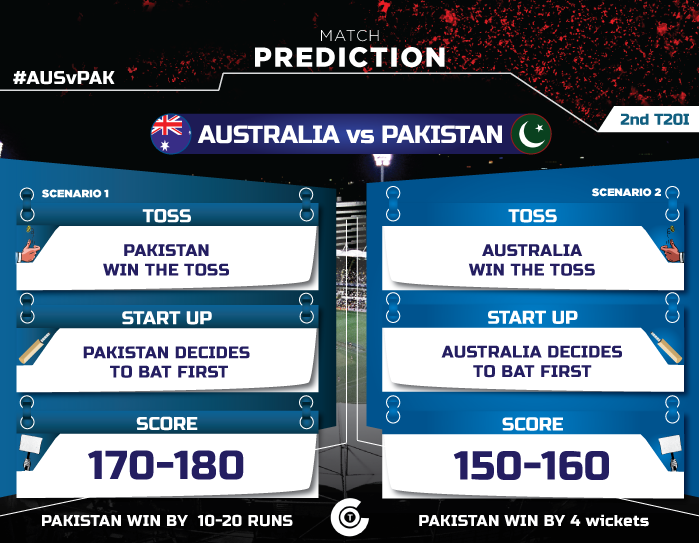