The average score in T20 Internationals at the Adelaide Oval in 165.

Sri Lanka must be brimming with confidence after whitewashing ICC’s number-one ranked T20I team- Pakistan– in the latter’s won backyard. The fact that the Islanders didn’t have a few of their key players for the tour, including regular skipper Lasith Malinga made the triumph look more appreciable. It’s time for the Lankans to now try and overturn Australia in another away T20I series.

The opening match will be played at the Adelaide Oval. The visitors didn’t quite make the greatest of starts as the Prime Minister’s XI beat them by one wicket at the Manuka Oval. But, Sri Lanka can take heart from the fact that they have beaten the Aussies in 8 T20Is out of 13, including a series victory in Australia in 2017. The hosts don’t have a great record at the venue, having won only one T20I.

The venue has hosted only four T20Is and the lowest score has been 144 with the highest being 188. The average score is 165. Two games each have been won by the chasing side and the team, batting first. But the average score batting first is 169 and hence, sides may go for batting first. The conditions will be cloudy, but with no chances of rain. The temperature will be around 18 degrees.

Aaron Finch and David Warner should be the opening duo. The latter had a torrid time in the Ashes, and he will be desperate for some runs under his belt. Steve Smith has impressed on ODI and Test comeback and he will be looking to replicate the same even in the shortest format. Glenn Maxwell can be inconsistent, but on his day can make a mockery of the best of bowling attacks in the world.

Alex Carey showed good form in the World Cup and was also decent in the T20 Blast in England. The keeper’s role will be key. One of Ashton Turner and Ben McDermott may make the eleven. In the bowling area, Mitchell Starc and Pat Cummins are the likely pacers with a third fast bowler in Richardson or Stanlake. The Aussies may also field the spin duo of Adam Zampa and Ashton Agar.

Kusal Mendis and Kusal Perera are big names and hence should be included after missing the Pakistan T20Is. Danushka Gunathilaka was excellent on the last tour and hence may continue to open the batting. Bhanuka Rajapaksha showed his power hitting skills and he deserves to retain his place in the lineup. Oshada Fernando did well in the last T20I and the onus will be on him as well.

Avishka Fernando is a dynamic all-rounder, but floundered in Pakistan. He may have to warm the benches. Shehan Jayasuriya and Dasun Shanaka have to step up, both with bat and ball. Wanindu Hasaranga has emerged as a more than handy all-rounder. Malinga’s inclusion will strengthen their bowling. The T20 skipper picked up four wickets in four balls against New Zealand in his last game. 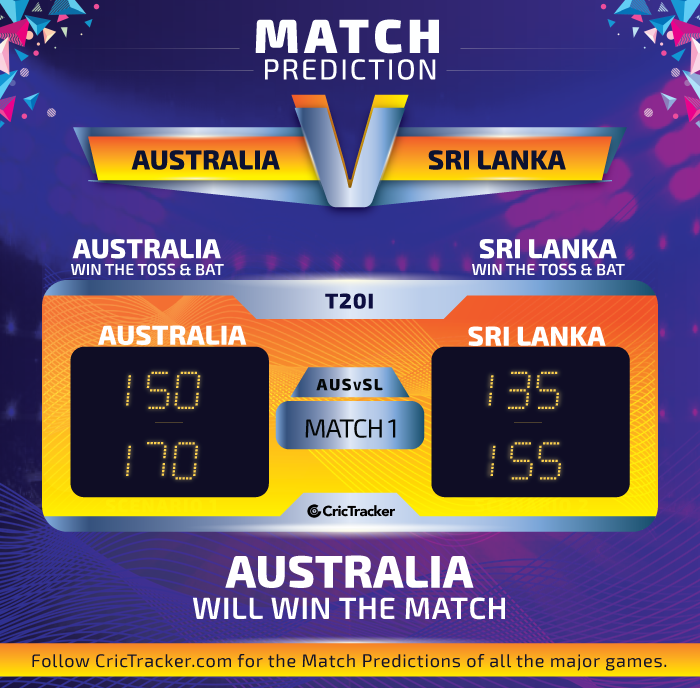