Glenn Maxwell has taken an indefinite break from cricket and D'Arcy Short has replaced him in the squad.

Following their dream run in Pakistan, Sri Lanka have crumbled like a pack of cards in the ongoing T20I series versus Australia. Nothing has gone right for them, and not a single player has been able to show some fight. The side, led by Lasith Malinga, started with a one-wicket defeat in the T20 practice match in Canberra after which Aaron Finch’s men have inflicted mayhem in their camp.

On the other hand, Australia couldn’t have hoped to be more clinical in the shortest format. The hosts thrashed the Islanders by 134 runs at the Adelaide Oval and then decimated them by nine wickets at the Gabba in Brisbane. The Men in Yellow will now be looking for a clean sweep in the third match at the Melbourne Cricket Ground. Meanwhile, Lanka would be playing to restore pride.

The pitch at the MCG isn’t an absolute belter, the average score being 147 in T20Is. Also, six of the 11 matches at the venue were by the chasing teams. The Aussies won’t mind even batting first though, keeping in mind their form. The conditions will remain cloudy throughout, but with minimum chances of rain. The temperature will be around 29 degrees with the humidity in the 30s.

Glenn Maxwell has taken an indefinite break from cricket to address mental health issues and D’Arcy Short has replaced him in the squad. But Short may not get a chance right away. Ben McDermott is most likely to replace Maxwell in the playing eleven. There’s no confirmation whether Mitchell Starc has returned from his brother’s wedding or not. Billy Stanlake replaced him in the eleven last time.

Stanlake may get another chance as he picked up two wickets last time, giving away only 23 runs. The others have been excellent as well. The Aussie batting hasn’t been put to test at all as they have lost only three wickets in two matches. David Warner, the leading run-scorer with 160 runs, is yet to be dismissed in the series. Steve Smith also notched his third T20I half-century in the last match.

There’s not much to talk about Lanka in any of the departments. Kusal Perera showed some promise in the previous encounter, playing at a decent strike-rate. The southpaw also has the top individual score for Lanka with 27 runs followed by Danushka Gunathilaka’s 21. A few of their batters have gotten into double figures, but none has been able to convert them into something substantial.

In bowling, Lasith Malinga, Dasun Shanaka and Lakshan Sandakan have one wicket each. Nuwan Pradeep has the best economy rate among the visitors at 7.71. Wanindu Hasaranga, who impressed so much in Pakistan, has been taken for 60 runs in the four overs he has bowled thus far in the series. The team is in a complete mess and it will need a herculean effort to turn things around. 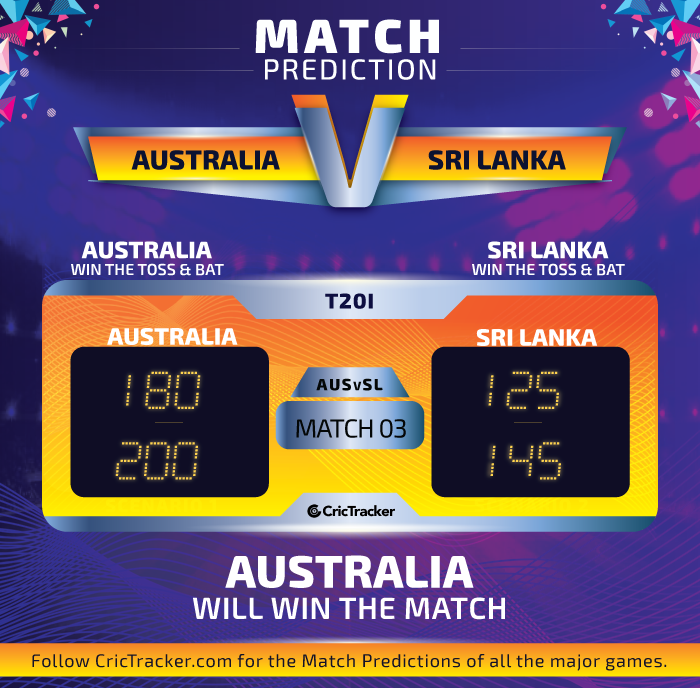