Jess Jonassen has bagged nine wickets in two matches in this series.

New Zealand Women suffered their second consecutive ODI series defeat this year as they went down to the Australia Women twice in two games. The White Ferns had their moments in the series as they lost the first game only by five runs. Chasing 242 at the WACA, the New Zealand Women were 188/4 in the 42nd over before suffering a collapse. Their skipper Amy Satterthwaite’s 92-run knock went in vain.

NZ were 92/2 in the 21st over chasing 248 in Adelaide but bundled out for only 152. Ellyse Perry’s maiden ODI century set up the series win for the Southern Stars. Jess Jonassen, who was overlooked in the WT20, showed her worth as an all-rounder. She scored 52 runs across both games and claimed nine wickets including two four-wicket hauls. The hosts would undoubtedly be hoping to complete a whitewash and continue their domination in the ICC Women’s Championship.

The third and final game of the 3-match ODI series between Australia Women and New Zealand Women will be hosted by the Junction Oval in Melbourne.

The game will be live on Fox Sports in Australia.

In the two WNCL games played in the last month here, the teams batting first scored 260 and 196 respectively. Victoria Women, the home team, won by 14 runs while defending 260 and lost by 1 wicket when they made 196.

(Will be added when there an update)

Amelia Kerr has been quite consistent in the games she played this year thus far. In each of the last three ODIs, Kerr has picked up at least two wickets. In the last six international matches, Amelia has bagged 11 wickets with at least one wicket in all those six. 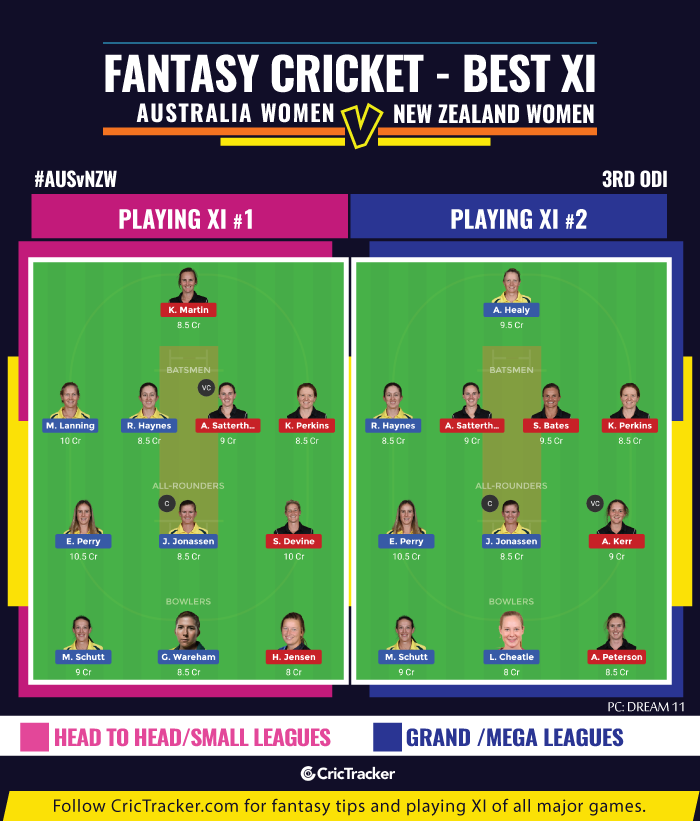 Suzie Bates’ recent ODI form doesn’t make her a direct selection that too at the cost of 9.5 credits. Leigh Kasperek, who was racing towards becoming the fastest Woman to 50 ODI wickets, picked only one wicket in the last four ODIs and got dropped.

Australia Women are expected to make it 3-0 despite a fight from the New Zealand Women.