The 1st of the three-match T20I series between Australia Women and Sri Lanka Women will be played at North Sydney Oval in Sydney.

Sri Lanka Women and Australia Women will lock horns in the first of the three-match T20I series on Sunday. The visitors were involved in a thrilling practice game against Cricket Australia XI which went down to the super over. However, they managed to win the match which must have increased their confidence multifold. Having said that, it won’t be an easy task for them to overpower the Australian team led by Meg Lanning.

The hosts are coming off a dominating 3-0 win over the West Indies women and have retained the same squad for this series as well. Though they won’t take them lightly as Sri Lanka has the potential to punch above their weight every now and then.

The weather will be perfect for the cricket match to take place on Sunday in Sydney. The temperature is expected to hover around 19-20 Degrees Celsius according to AccuWeather. There is no chance of rain whatsoever during the match timings.

Only a solitary T20I has taken place at the venue before between Australia and New Zealand Women and the hosts had chased down 163 comfortably. If the previous WBBL season is concerned, the pitches were decent for batting and the scores of 160 were easily crossed. Chasing should be a good option for the team winning the toss.

Alyssa Healy, more often than not, gives her team a rollicking start. She attacks the opposition bowling from the word go and had a brilliant West Indies tour. Ellyse Perry and Meg Lanning are also very good players in the shortest format. In the bowling department, Megan Schutt and Jess Jonassen would be key for the home team.

Chamari Athapaththu is the best player for Sri Lanka Women. She opens the batting for the team and also delivers four overs with the ball. Apart from her, Sashikala Siriwerdana is also a key player for them. 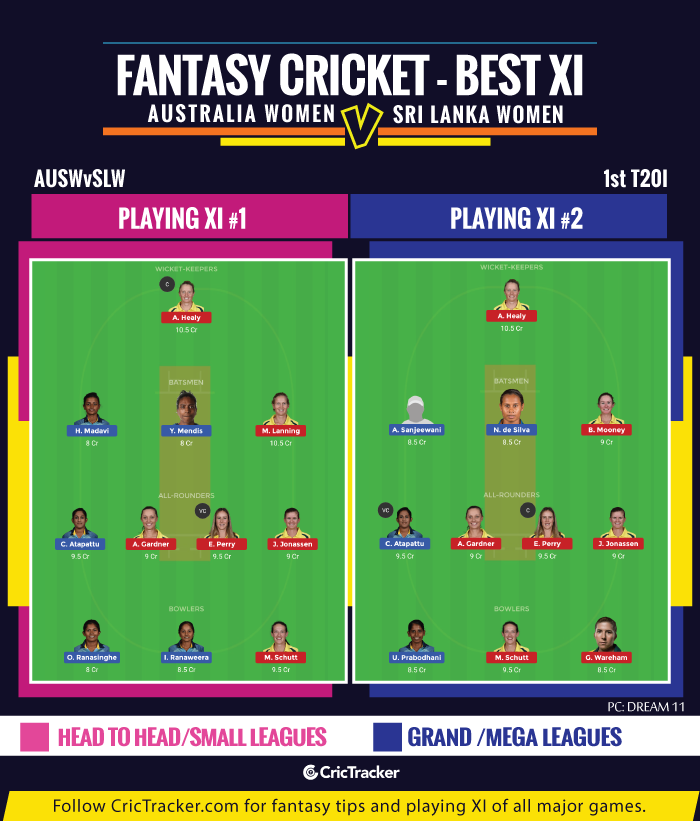 Prefer having more Australia bowlers and all-rounders in any case, as there is a possibility of Sri Lanka losing all their wickets in 20 overs.

Australia Women are the overwhelming favourites and are expected to take a 1-0 lead in the series.