Alyssa Healy will be a safe option as captain or vice-captain considering her recent consistency.

The 2nd game of the 3-match T20I series between Australia Women and Sri Lanka Women will be hosted by the North Sydney Oval in Sydney.

The Australia Women continue to be dominant in whichever format they play as they defeated Sri Lanka Women by 41 runs to go 1-0 up in the 3-match T20I series. It was Beth Mooney’s century that guided Australia Women to their 2nd highest T20I total and also the first-ever 200+ total on Australian soil in Women’s T20I cricket.

Aussie Women cruised to 17th win in 19 matches in 2019 but Sri Lanka Women didn’t give it up easily. Chamari Atapattu matched Mooney by scoring exactly 113. It was the first T20I ton recorded for Sri Lanka Women and 50 runs more than their previous highest individual T20I score. The two sides will face off in 24 hours of time in the 2nd T20I at the North Sydney Oval.

There are chances of cloud covering on Monday morning at the North Sydney Oval. However, the skies are expected to get cleared by evening and no rain is expected during the match.

The batting first side ended up with five 160+ totals n the six Women’s T20s that North Sydney Oval has hosted since 2018. The pitch here becomes easy to bat in the night matches and we could be in for another high-scoring match. Sri Lanka could fancy their chances if they can restrict the hosts up to 160 and bat the way they did on Sunday.

Alyssa Healy is a must in the fantasy team as she is in the form of her life with the bat. Shashikala Siriwardene could be worth for her value. She could be putting on some good performances with both bat and ball. Ashleigh Gardner might bowl more overs if the pitch assists spin on Monday.

Alyssa Healy will be a safe option as captain or vice-captain considering her recent consistency. 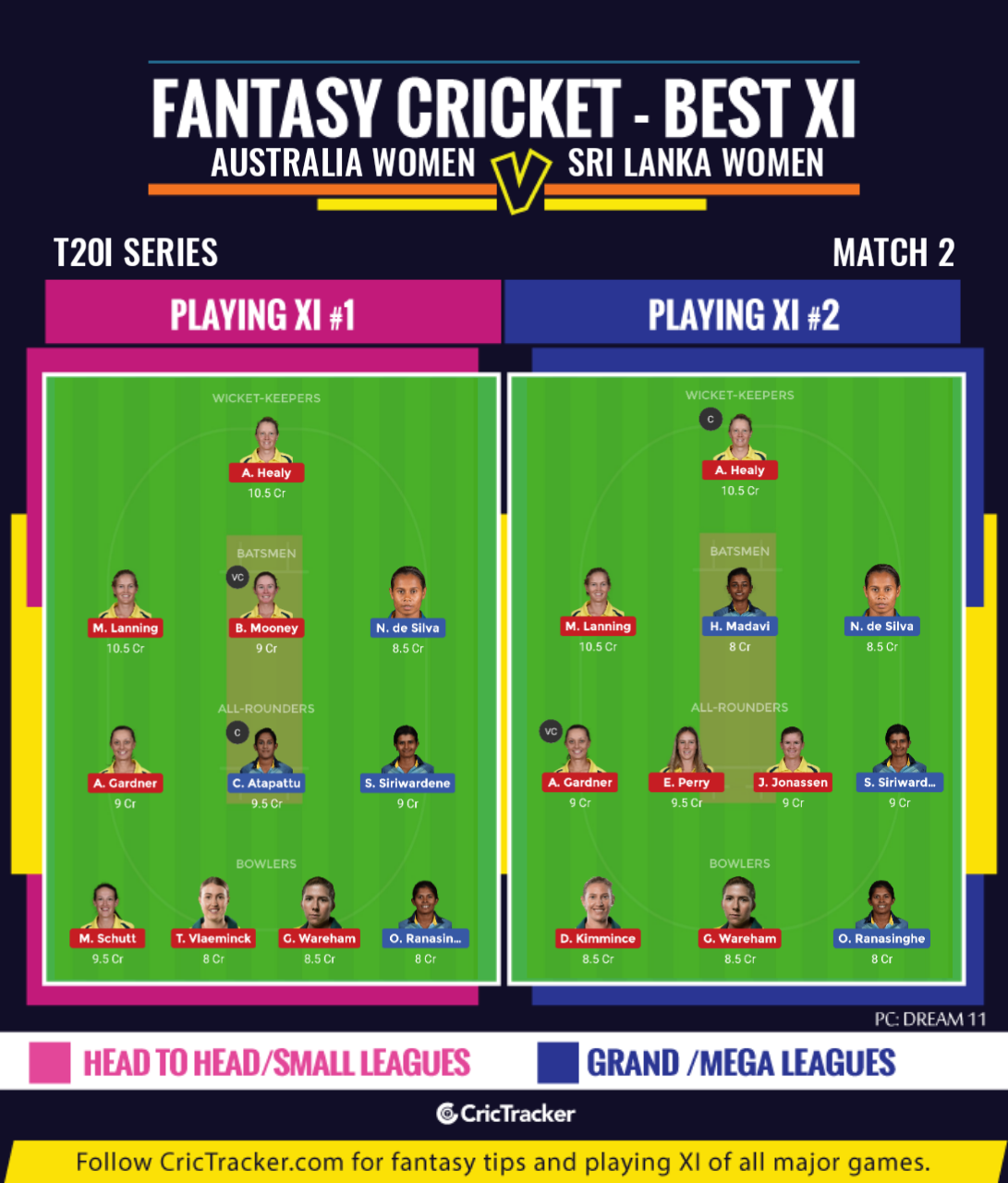 Chamari Atapattu is way too inconsistent in the shorter format as she scored only one fifty in 76 T20I innings before scoring a century on Sunday. Beth Mooney is similar in the T20I format but has scored two centuries and unbeaten 86 in the last seven T20Is at home. Australia Women could bat first once again as Sri Lanka’s best chance to win will be chasing and they would do the same.

Australia Women are expected to seal the T20I series with one game still to be played.