Team combination of the fantasy team will depend a lot on the toss.

The 3rd and the final game of the 3-match ODI series between Australia Women and Sri Lanka Women will be hosted by the Allan Border Field in Brisbane.

Australia Women are on the verge of breaking their own world record of the longest winning streak in the Women’s ODI cricket ever. They have won 17 consecutive ODIs and are the clear favourites going into the final match of the series as well. The Meg Lanning-led side registered two thumping victories batting first to seal the series and will be keen to inflict a whitewash on the visiting Sri Lanka side who proved to be a no-contest for the hosts.

Chamari Athapaththu has gone quite after playing a blinder in the first T20I. Australia Women bowlers have got hold of her early in the ODIs which has led to Sri Lanka struggling to score runs at pace in the chase. Sri Lanka Women batted full 50 overs in the second ODI which must have given them a lot of confidence and will hope to give some fight to the opposition before leaving the country.

There is no possibility of rain whatsoever in Brisbane on Wednesday. It will be sunny throughout the day and the warm weather will greet both the sides. The temperature will hover around 22-23 Degrees Celsius during the match according to AccuWeather.

The surface at the Allan Border Field has been brilliant to bat. Australia, so far, in both the ODIs, have posted a score in excess of 280 and another similar strip is expected to be on offer. The spinners might also come into play in the latter half of the game.

Ellyse Perry and Jess Jonassen are a must in the fantasy team irrespective of whether Australia are batting first or second. Ashleigh Gardner is also a crucial player but her contribution might be limited. She has failed in both the ODIs with the bat and bowled only a couple of overs in the previous ODIs. But she conceded only 9 runs in nine overs and picked two wickets in the series opener.

Rachel Haynes might carry her good form through and will be keen to score as many she can in the final ODI. Meg Lanning has gone comparatively quite with the bat and she is due a big score. 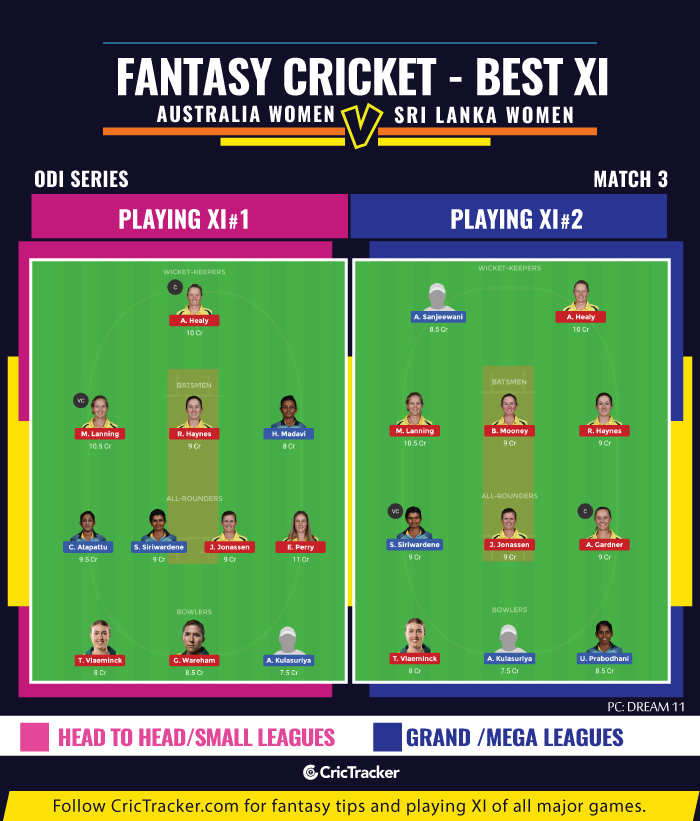 Team combination of the fantasy team will depend a lot on the toss. If Sri Lanka bat first, they are not expected to score more than 200 runs. Picking almost all Australia bowlers will be a great move in that case. Also, it would be wise to pick only the top three of Australia with the bat.

Also, Australia might make a few changes to the playing XI shuffling the players so keep an eye on the toss as well. Sri Lanka too is expected to give a chance to the benched players before leaving the country.

Chamari Athapththu might want to make an impact before leaving Australia and she might score big in this dead rubber.

Australia Women are expected to complete a 3-0 whitewash.