Megan Schutt and Georgia Wareham are consistent with the ball in T20Is.

The 3rd and final game of the 3-match T20I series between Australia Women and Sri Lanka Women will be hosted by the North Sydney Oval in Sydney.

It seems as if Australia Women are at a different level when it comes to Women’s cricket. Even a top side like England couldn’t do much in the Ashes series it at home this year. It was obvious that Sri Lanka Women would struggle to match the level of Australia. The first T20I saw Chamari Atapattu’s century without which the visitors were well behind the hosts in that game.

In the second match, Chamari got out cheaply and her side struggled to even reach the 100-run mark. The target of 85 runs was too less for them as they chased it down in 9.4 overs. Erin Burns scored an unbeaten 18-ball 30 in her maiden International innings. Openers Beth Mooney (28*) and Alyssa Healy (21) also contributed to easy run-chase.

The final T20I of the series is unlikely to get affected by the weather as sunny weather is expected on Wednesday morning.

The North Sydney Oval is a much better venue for batting compared to what Sri Lanka Women did in the previous match. We might see another 200+ total if Australia bats first on a new track.

Given the performances in this series, Alyssa Healy and Beth Mooney can be the first names in the fantasy team. Megan Schutt and Georgia Wareham are consistent with the ball. Shashikala Siriwardene will be hoping to make a mark with her all-round ability.

Alyssa Healy will be a safe option as captain or vice-captain due to her consistency in the shorter formats. 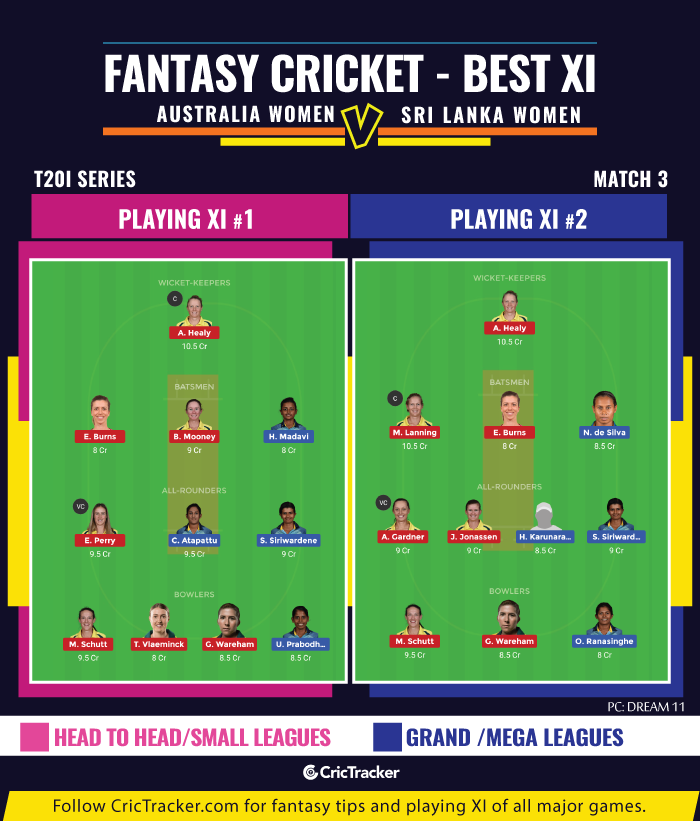 Jess Jonassen hasn’t got much scope to perform in this series. The final T20I could give her that chance. Erin Burns could continue to bat in top four and Meg Lanning might come at No.3 if the Aussies bat first. Ashleigh Gardner is expected to return to the playing XI.

Australia Women are expected to complete yet another T20I whitewash.