Andrea-Mae Zepeda, the Austria skipper, scored 45 runs in three matches which are twice more than any of her teammates. The 4th game of the 5-match T20I series between Austria Women and Germany Women will be played at the Seebarn Cricket Ground in Harmannsdorf.

Germany Women continued the thrashing of Austria Women on Thursday where they won both matches by huge margins to seal the series with two games still to be played. In the 2nd T20I, Janet Ronalds scored an unbeaten 74-ball 105 as the visitors finished with 191/0. Emma Bargna took 5-wicket haul later to seal a 138-run victory for his team. While Bargna took rest in the evening match, Anne Bierwisch took a hat-trick as Austria’s last six players were dismissed for ducks before Germany sealed a 10-wicket win.

There could be rain at the Seebarn Cricket Ground on Friday as forecast insists scattered thunderstorms during the match.

The Seebarn Cricket Ground in Harmannsdorf is hosting this Women’s T20I series on a matting track which is not a usual sight in International cricket but they might not show any slow nature and be flat most of the time.

Andrea-Mae Zepeda, the Austria skipper, scored 45 runs in three matches which are twice more than any of her teammates.

Anne Bierwisch claimed a hat-trick during the evening match on Thursday where she had given away only five runs in three overs.

Asmita Kohli took four wickets in two matches she played at the cost of 29 runs which came at an economy of 4.14 only.

Suzanne McAnanama-Brereton played two matches on Thursday where she bagged five wickets at an economy under four. 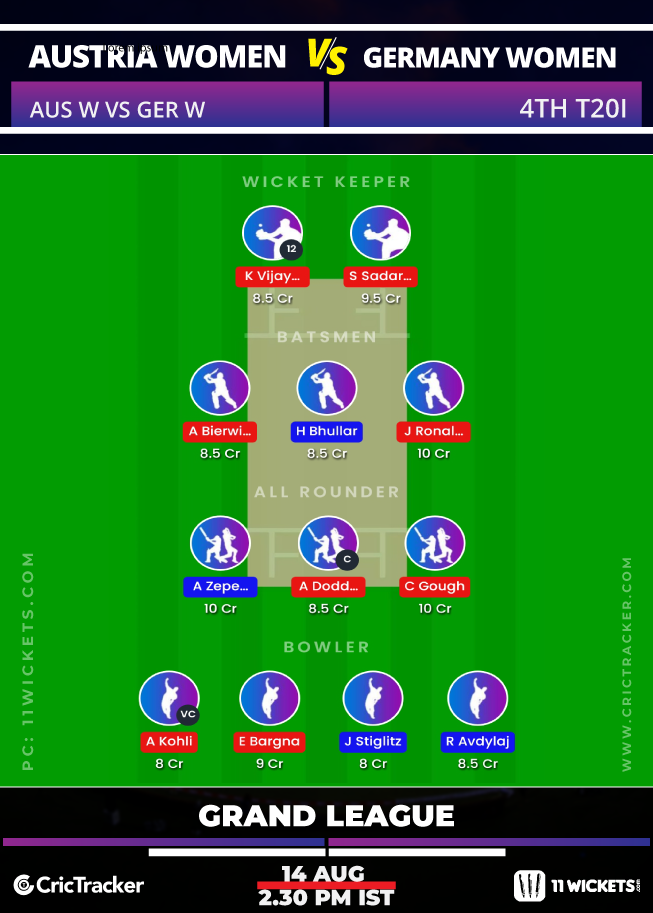 The Austria players except their skipper have hardly shown any fight in this series thus far. Hence, the selection of fantasy team for this series has become about picking the best possible players from Germany’s XI and picking two of them who can have maximum impact in the match.

Germany Women can be seen registering their 4th successive win of this 5-match T20I series.