Emma Bargna has taken nine wickets across three matches in this series at a strike rate of 8 and an economy rate of only 2.75. The 5th game of the 5-match T20I series between Austria Women and Germany Women will be played at the Seebarn Cricket Ground in Harmannsdorf.

Germany Women continue to hammer the Austria Women in the T20I series as they recorded an individual century and a 5-wicket haul during the 4th T20I on Friday same as they way during a huge win on Thursday morning. Germany Women now have won each of their previous eight T20I matches and would be hoping to make it nine in nine on Saturday. A lot of changes in the playing line-up and batting order could be seen on Saturday from both sides due to their extreme performances in this series.

Light rain and scattered thunderstorms are predicted during the 5th T20I match to be hosted on Saturday morning.

The Women’s T20I series between Germany and Austria is been played at the Seebarn Cricket Ground in Harmannsdorf is hosting where matting tracks are available. The outfield is quite slow here and will need some good timing to score boundaries.

Asmita Kohli has chipped in with five across three matches in this series with help of a 3-wicket haul and at an economy rate below four.

Emma Bargna has taken nine wickets across three matches in this series at a strike rate of 8 and an economy rate of only 2.75.

Milena Beresford has not got to bat yet in this series but took four wickets in 10.5 overs bowled in three matches played.

Anne Bierwisch claimed a hat-trick during the 3rd T20I match and had conceded only 29 runs in seven overs bowled in this series. 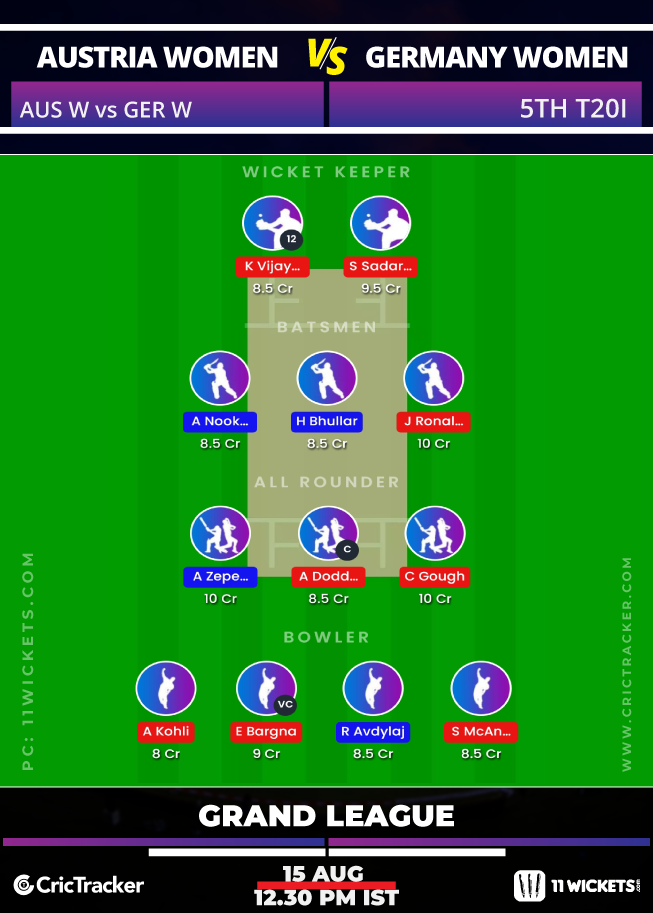 Selecting a wicketkeeper from Austria Women will be best option for Saturday’s match as it will help us to pick an extra player from Germany Women’s team who is a batter or bowler or even all-rounder. This move could cost us only in the case of Germans promoting one of their keepers up the order.

Germany Women can be seen registering their yet another big win on Saturday to ensure their whitewash over Austria Women.