The battle between Chris Gayle and Rashid Khan will be in focus.

Kabul Zwanan will play their second match in as many days on the doubleheader day of the Afghanistan Premier League (APL). With only five teams competing, almost all the teams, at some stage, will play back-to-back matches in the tournament. However, Balkh Legends will get their campaign underway who will be led by none other than the veteran Mohammad Nabi.

The legends, like their team name, certainly have some of the legendary cricketers in the shortest format of the game. Nabi is definitely one of them and the universe boss will also lighten up Sharjah with his presence. Also, Ravi Bopara, Colin Munro and Ryan Ten Doeschate give them the edge on any opposition in the competition. They will be up against the Kabul team who will have a better idea of the conditions having played the season opener on Friday.

Rashid Khan, Zwanan’s skipper, would be first wanting to begin the APL campaign on a high before thinking about their next game. The players though will have to gear up to play two games within 24 overs in the sapping heat of the United Arab Emirates. Despite the fact that the games are being played in the evening, the temperatures in the mid-30s and especially the foreign players will have to make do with the conditions as soon as possible.

The batting-order is star-studded for the legends. Colin Munro and Chris Gayle will open the innings for them while Ravi Bopara and Nabi will look after the middle-order duties. While Gulbadin Naib is more than capable with the bat, Ikram Ali Khil will be the wicketkeeper. Aftab Alam Mirwais Ashraf will take care of the pace attack, Qais Ahmad and Malcolm Waller are decent spinners as well. Though the availability of the former for this game is still unknown as he was playing in the U19 Asia Cup semifinal in Bangladesh on Friday.

Kabul should field the same eleven from the tournament opener. Luke Ronchi will keep wickets and should bat at the top of the order with Hazratullah Zazai assisting him. Rashid Khan will once again look to lead the side from the front while the likes of Laurie Evans and Wayne Parnell are expected to support him well. Ali Khan, Fareed Ahmad and Zamir Khan will add spice to the bowling attack as well.

The prediction is for Balkh Legends to win the match comfortably. 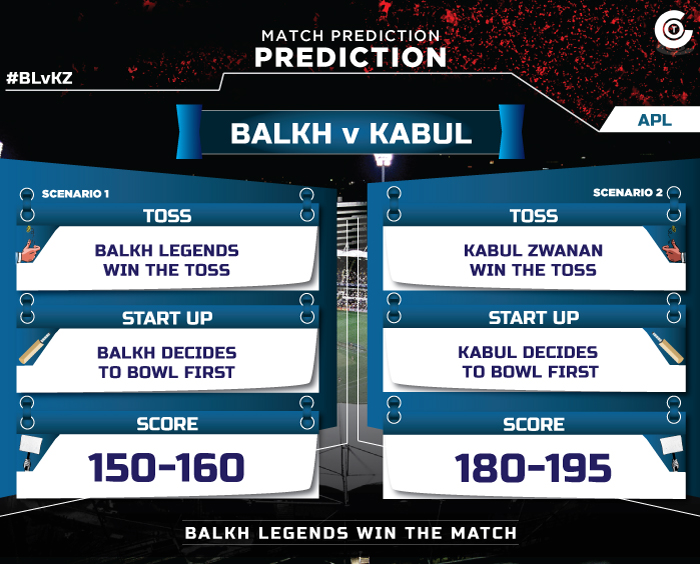