Both teams have had contrasting campaigns thus far in the tournament.

Sri Lanka Legends have made a stupendous start to their campaign in the tournament. Out of their first four games, the team, led by TM Dilshan, has won three and are sitting pretty in the top half of the points table. This year, they beat the West Indies Legends and South Africa Legends. In their next game on Wednesday, March 10, they are scheduled to lock horns with the Bangladesh Legends.

Another victory might also take them to the top of the points table. The Bangladesh Legends, on the other hand, haven’t had the greatest of starts to the T20 league. India Legends thumped them by 10 wickets after which England Legends got the better of them. It remains to be seen whether or not they can avoid a hat-trick of defeats. It goes without saying, the Lankans would start as favourites.

The pitch at the Veer Narayan Stadium has been a good one for batting. But going by the trends, it has favoured the team batting second. Hence the teams shouldn’t have any second thoughts while chasing. The temperature will be around 31 degrees Celsius with the humidity around the mid-30s.

Playing Combinations for BDL vs SLL

Mohammad Rafique went for 20 runs in the first over he bowled in the tournament. But ever since then, he has picked up two wickets, conceding 37 runs in six overs. The other night, the left-arm spinner got the prized wicket of the dangerous Kevin Pietersen and also got rid of Chris Schofield.

Dilshan has been in jaw-dropping form with the bat in hand. In the four matches in the tournament, he has notched 138 runs at an average and strike-rate of 46 and 121.05 respectively. In the last two games, he got scores of 47 and 50*. Moreover, he also picked up two wickets, showing his class with the ball as well.

The prediction is for Sri Lanka Legends to win the match. 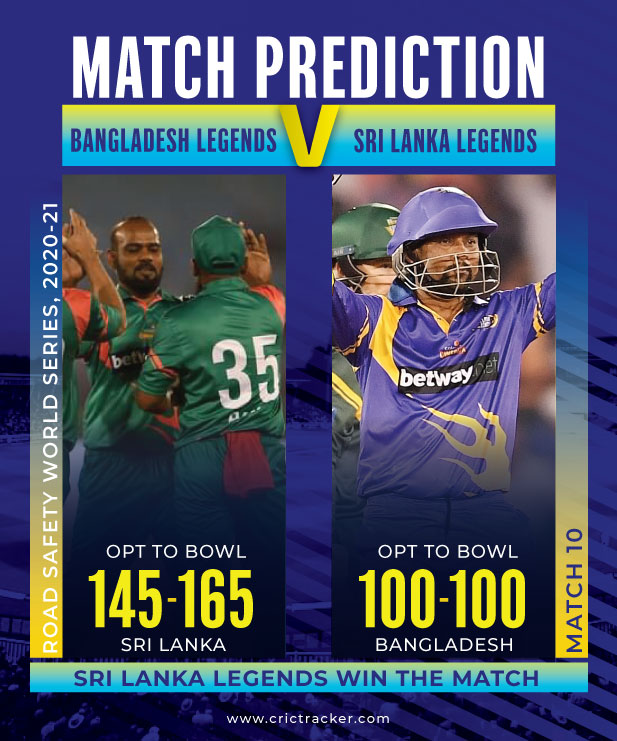