The Tigers have never beaten the Black Caps in T20I cricket.

Bangladesh and New Zealand are set to cross swords in Match No.1 of the five-match T20I series on Wednesday, September 1 at the Sher-e-Bangla National Stadium in Dhaka. Back in August, the Tigers beat Australia 4-1 in a five-match series. Therefore, Mahmudullah and Co. must be brimming with confidence.

Shakib Al Hasan became the Player of the Match in the final game and he also walked away with the Player of the Series award. New Zealand, on the other hand, have a young squad for the series and will be captained by Tom Latham. The Black Caps need to pull a rabbit out of the hat to defeat Bangladesh.

The pitch in Dhaka is expected to be on the slower side. The spinners are most likely to come into play. Slower balls from the fast bowlers will also hold a lot of significance. The track is expected to deteriorate and hence, batting first should be the way forward for both teams.

Playing combination for BAN vs NZ

Shakib Al Hasan wasn’t in the greatest of form prior to the T20I series against Australia. However, he gained back rhythm as he scored 114 runs from five games at an average of 22.80 and a strike rate of 100.88. He didn’t score a half-century but ended as Bangladesh’s leading run-scorer in the series. Not to forget that he also picked up seven wickets in the series.

Mustafizur Rahman was outstanding in the T20I series against Australia. The left-arm fast bowler picked up seven wickets from five games at a stupendous economy rate of 3.52. The pacer bowled in the powerplay and at the death overs and didn’t flatter to deceive. He bowled at an average of 8.57, the best among the bowlers, who bowled 10 or more overs. 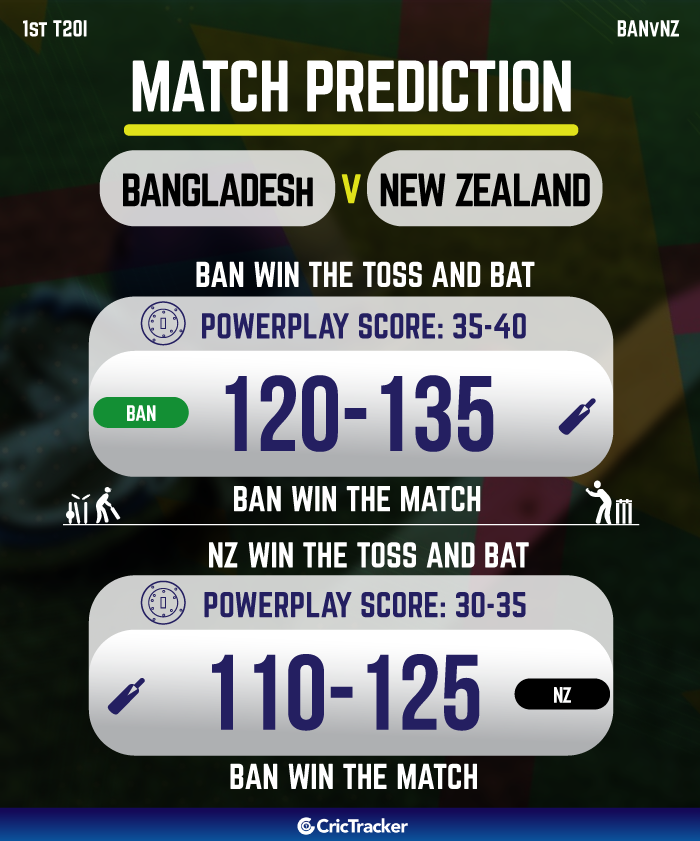